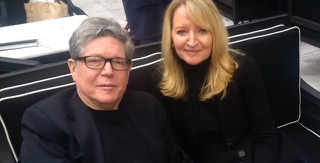 TheVJ.com was founded by Lisa Lambden and Michael Rosenblum.

(It was actually Lisa’s idea).

A married couple, they have spent the last decade (and more) traveling the world, running their intensive professional video boot-camps for a wide range of clients from The BBC to NBC to The United Nations to The Guardian newspaper and many, many more. More than 100 clients, worldwide. Together they have logged more than 1.5 million air miles year, and run their courses from London to Hong Kong to Cape Town to a ship in the middle of the Indian Ocean. They have trained more than 40,000 people in their unique and highly successful professional VJ courses.

Three years ago, Lisa had an idea: Let’s offer this professional training online!

TheVJ.com is the result of that idea, plus lots of hard work. We have attempted to capture what made and continues to make our in-person boot-camps so popular and yet so effective. Over the years, we have created and distilled an entirely new way not just to teach video literacy, but to think about and work with this new medium.

"There is no point in taking all the trouble to find a story, go out and shoot it, script it, edit it and share it if no one wants to look at it". The world is today awash in video – it’s easy to find and easy to make. The trick, and the focus of all that we do, is to marry the technical skills to compelling storytelling. You have to create a product that everyone will want to watch. That’s the key – making something everyone will want to watch.

Starting in 1988 as a producer for CBS News, Michael quit, bought a small hand-held video camera and set out to see if he could make TV on his own – no cameraman, no crew, no producer, no reporter. "I wanted to see if it was possible to create a personalized journalism done the same way print, photojournalism or radio were done – one person, one vision, one story. I was looking for authorship."

What he also created was an entirely new way of producing high quality television at a very low cost. The idea worked, and in the subsequent years, he built or designed or refined many of the most successful television and media companies in the world. Local TV stations built on the model; national networks; global networks.

The shift from over-the-air broadcasting to cable brought on thousands of new channels that needed millions of hours of content and the model worked incredibly well there as well. Together, Michael and Lisa have produced (and continue to produce) more than 8,000 hours of programming for cable worldwide.

In 1999, Michael began a 5-year relationship with The BBC, to convert their entire national news operation from conventional crews to his VJ model. He took the network from fielding 80 Beta-cam crews a day to cover the country to being able to field more than 1200 cameras a day. It was at this time that he met Lisa, who was a 17 year veteran of The BBC, having been an on-air reporter, a producer and now an executive, charged with heading up the VJ project for 'The Corporation'.

It soon became obvious that there was more here and a business relationship (and a world beyond The BBC). Since then, they have expanded their training business, their production business and their consulting business worldwide. But everything they do is based on the same principle – an entirely different approach to making television and video – a personal vision; bringing a sense of authorship to the medium; making television and video as simple and inexpensive to make as print –and teaching and empowering the world in this most powerful of media.