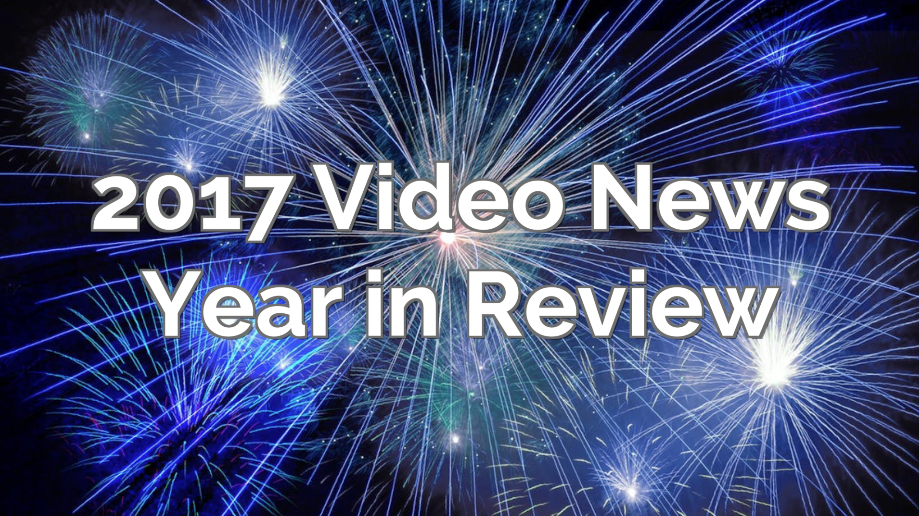 The FAA this introduced new regulations for drone pilots to try and keep up with the growing popularity of the devices.

At the start of the year the New York Times and Washington Post both expanded their video operations in the newsroom due to increased demand online for video content.

After an incident over a seat on a United Flight, passengers took out their smartphones and started recording, leading to an Internet campaign against United and other Airlines for their treatment of passengers.

Camera maker RED announced that they were going to release a new smartphone designed for video producers. One of the more anticipated features is the phone's holographic screen.

Facebook has said over the past year that in the next decade Facebook will become almost completely video content. To compete in the video world, particularly the high-quality, long-form video industry Facebook launched a new section called Watch. You can go here to see series produced specifically for the platform. This is Facebook's attempt to be like Netflix.

Local News of the 21st Century:

We talked with local news producer Geoffry Roth about the future of television news in the 21st century. He believes that all newsrooms will soon just work with smartphones.

We ran a 40 minute film school workshop to prove that you don't need to spend hundreds of thousands of dollars on film school to learn to produce quality video.

On the 500th Anniversary of Martin Luther nailing his 25 Theses to the church doors we pinned our own 25 Theses on Media on the revolving doors of 30 Rock.

VR and 360 video had a huge year going from novel idea to mainstream almost over-night. With the adoption of 360 video by platforms like Facebook and YouTube, and the explosion in affordable VR and 360 cameras, people around the world are experimenting with this new video form.

Facebook launched a new app for smartphones called Creator. The app is particularly for video producers on the platform who want to better track their videos' performances and their audience.

Facebook announced that they would be rolling out a new app for Facebook Live creators to give them more control over their live broadcasts. The app will allow for multiple camera set ups, graphics and other features that producers are hungry for.

The iPhone changed in the biggest way in 10 years with the iPhone X. It has one of the best camera systems on a smartphone and is a tool that you could use to producer professional video for the internet or television.

If iPhone's aren't for you the Pixel 2 is one of it's best competitors. The camera in this phone rivals not only the iPhone, but DSLR cameras as well.

After many years of holding out, Apple announced that with new OS updates they would no longer support FCP 7. Time for you to upgrade and learn to edit with FCP X or Premiere.

In a new update from Apple, Final Cut Pro X now supports native VR editing. No more stitching, not more hoping for the best, you can now edit VR in FCP X. Best of all, if you have a supported device, you can preview your edit in VR before exporting.

The Economist has found success in video on the Internet. However, they are learning that their success on YouTube may be more profitable than Facebook.

We are launching a new kind of TV Network in Brooklyn, New York. We are teaching the people of Brooklyn to make their own content, and reap the benefits of it.

Facebook and UMG announced a multi-year licensing agreement that allows users on Facebook to use copyrighted material from UMG without fear of a lawsuit.