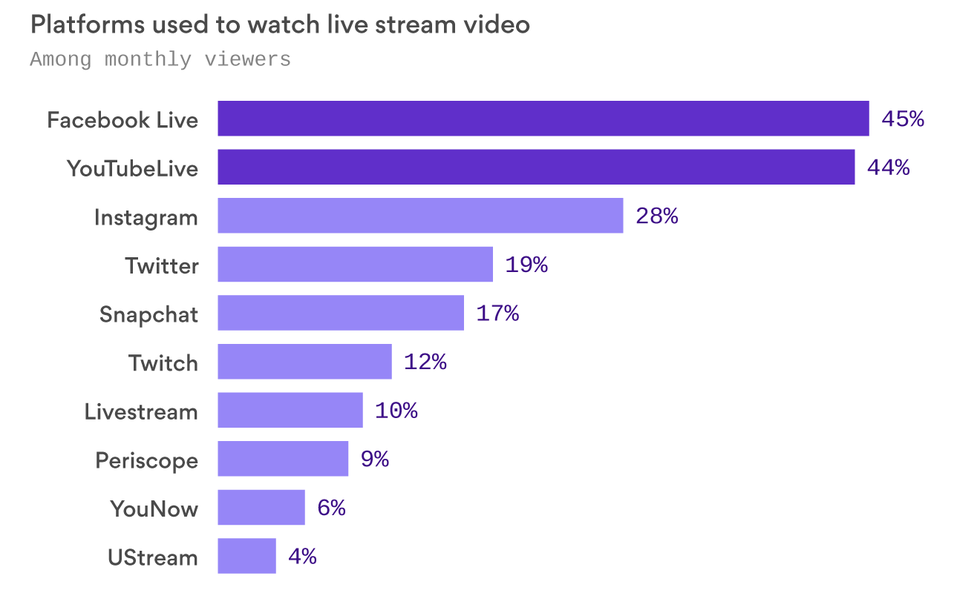 Axios: The Future is Live

Live streaming has grown wildly popular in the last five years or so. Maybe you remember the first consumer live streaming app that took the world by storm: Meerkat. Since then, big players like Facebook and YouTube have gotten into live streaming and have helped turn it into a world-wide sensation. Now, no one even remembers their Meerkat or Periscope login.

Additionally, according to the report, Facebook claims that nearly 1 in 5 videos on Facebook now are live and the service's usage has grown over 4x since its initial release last year. That's after just one year; it's not too far fetched to imagine that this ratio is only going to go up as more people do live video, and technology becomes easier than it already it.

So what does this mean for you?

It means that live streaming is big business. It brings in a lot of viewers and is a lot of what people are looking for increasingly on the web -- particularly on YouTube and Facebook. This means that you should be doing live streaming as well. While your main business and work may not be live streamed, it is certainly a great place to connect with your audience and showcase your work in a teaser format.

Let's say you are out in the field shooting with an amazing character. Set up a quick live stream and make people aware of your project and introduce them to your character -- building excitement for what may ultimately be. Maybe you are editing the piece and just finished a nice sequence you can't wait to show people -- throw it up on live. Additionally, these platforms, particularly Facebook, are great to get as many eyes on your work as possible. You can share a live stream with a group or network that you think may enjoy, and then who knows maybe it catches on and gets shared around the web.

Live boom: Facebook launched its live platform last year and now says 1 in 5 videos on its platform are live and daily time spent watching Facebook Live broadcasts has grown by more than 4x.

Both platforms have launched a ton of live-streaming partnerships around sports in particular. Why? Look at the type of programming watched live versus on DVR, via comScore: