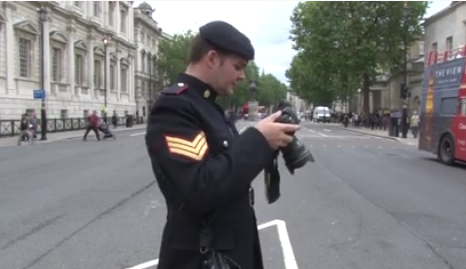 David McCann was a newspaper reporter when we met him in London at our most recent intensive 4-day boot camp.  David had not touched a camera professionaly before the video you see above.  Now working for the British Forces Broadcasting Service (BFBS) McCann hopes to use video to communicate stories of active service members as well as verterans.

As you can see from the video above it is not difficult to make professional video -- this was just after 4 days.  If you follow the rules, learn the essencials of storytelling, and utilize the technology available to you, you too can make professional quality video.

McCann was a newspaper reporter, so using video is a common sense move for him considering the shifting media landscape.  We have often found that print journalists make an excellent transition to video - they know how to find a story and tell it.

However, even if you are not a reporter, video can be just as important, if not moreso, to your career as well.  No matter what business you are in, video is more and more becoming a necessary tool to succeed.

What McCann did quite well was follow the instructions inherent in the 5-shot method.  As we always say, the more closely you adhere to the basic rules of acquisition, the more easily the piece will come together for you.

In traditional television crafting, the edit is often a 'rescue'. That is, you come back from the field with a big pile of 'stuff' and then have to wade through it to figure out how to best put it together.

Print reporters work well in our system because anyone who has been a newspaper reporter knows that the last thing you want to do is come back to the newsroom with a 'big pile of stuff' and then try and write a story.

A good newspaper reporter 'hears' the story in his or hear head and then commits it to paper.  A good video journalist will hear as well as 'see' the story in their head before committing it to the timeline.

That's discipline, but it works.

So, if you want to make a great video like David McCann for your career or business join us here on TheVJ.com or for our next boot camp in September in New York City.