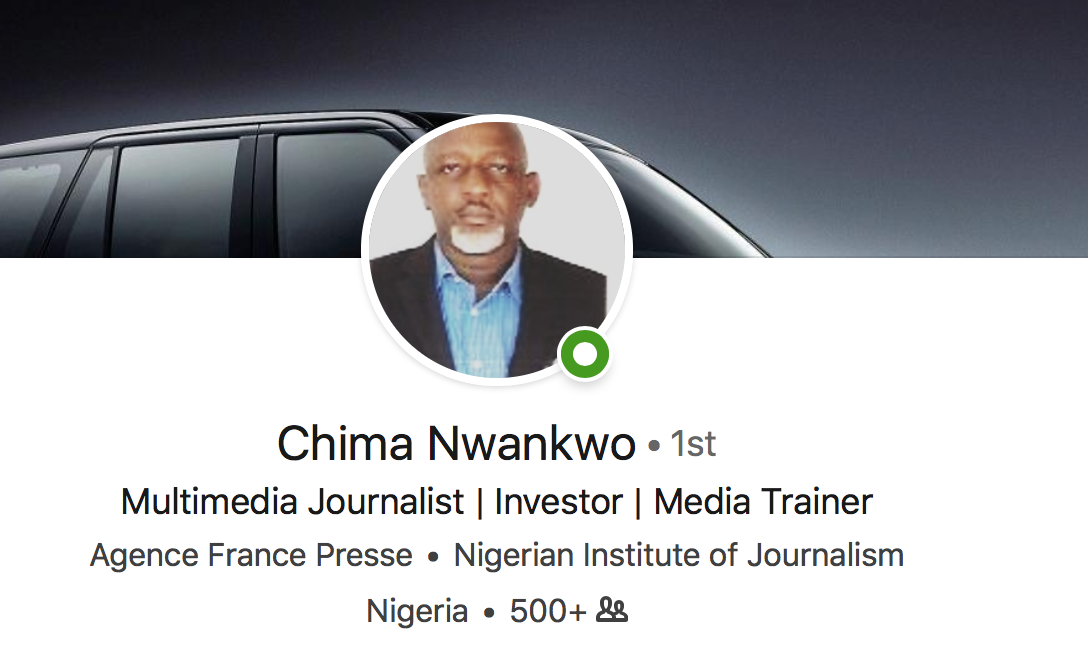 Chima Nwankwo, MoJo in Nigeria Has A Question

I recently got a letter...

well, letter is an anachronism these days....

I got a 'Message' on LinkedIn from Chima Nwanko.

I didn't know Chima Nwankwo, but I do now...

He's a Multi Media producer/reporter based in Nigeria.

At the moment, he's working as a stringer for AFP, but he has been around for a long time, and has a long list of both skills and accomplishments.

From his LinkedIn page:

"I and my team shoot,script,edit and upload short or long form factual video content in West Africa for clients who have various multimedia platforms.TV,Mobile,Online
*Also provide turnkey support services for filmmakers looking to shoot in Nigeria.From pre to post production,we handle all the logistics and accomodation.

As I said, he has all the skills.

He also has all the training you could want.  He has a Post Grad degree from the Nigerian Institute for Journalism, and has worked as a MoJo trainer and teacher.

His problem? Making a living.

Chima is not alone. There are thousands of people around the world in his position - they have the gear, they have the skills. In fact, there are so many of them, and more all the time, that what they don't really have is the income.  Let us be honest here - working as a MoJo or VJ stringer is not going to really pay the bills.  So, Chima wrote to me asking what I thought he should do.

Nigeria, as one of the richest countries in Africa, is pretty sophisticated when it comes to TV and video.  As far as I can tell, and it's pretty spread out between national and local, Nigeria has more than 600 cable, satellite and broadcast channels.  And this does not even beging to touch onine and mobile, which is just starting to emerge.

So there is an enormous demand for video content in Nigeria. Each of those channels has to provide content, or what is the point of owning and running a commercial network?

And where is that content going to come from?

I have not been to Lagos in years and years, but I have been to MIP and MIPCOM lots and I am willing to bet that the vast majority of that content is from acquisition of US and European programming.

I bet there is an appetite, at least to some degree, for locally produced programming - Reality Shows, Game Shows, Docs and fiction.

Mr. Nwankwo has all the skills and all the gear that he needs to create that kind of content.  He knows how to shoot, edit, produce, and write. He has been doing that for years.

News does not have a lot of financial value.  It is dead only a few minutes after you make it. But good content, even non-fiction, real life stories can be re-run for years.

It's all about characters and arc of story - whether it's House Hunters Nigeria or The Real Housewives of Kano.

And so does Mr. Nwankwo.

We have had some long talks and I think he is willing to start to take his skills outisde the very limited world of being a stringer for a news wire service.

Anyway, it's worth a shot.

After all, Video News International, one of my own companies (we did news as you can tell from the name), quickly morphed into the largest producer of non-fiction Docudramas on the East Coast in just two years.

We made what people wanted to see.