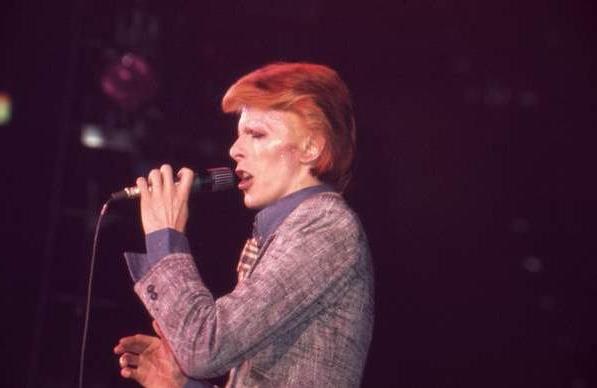 Peter Klein is an outstanding journalist.

Founder or the Global Reporting Centre, Director of the International Reporting Program and Associate Professor at UBC Journalism. He was also a producer at CBS News 60 Minutes, winning many awards.

He was also among the very first VJs in the world.

In 1993, Peter Klein, then a student at Columbia University's Graduate School of Journalism was one of my students and came with me when we founded Video News International, the world's first videojournalism business.  He was on the very cutting edge of this new kind of journalism.

In 2003, as a producer at CBS News' 60 Minutes, Peter conducted a series of interviews with David Bowie.

At least, until now.

Peter was a 'producer', not the 'talent'.  The 'talent' was Ed Bradley. In the middle of the piece, Bradley suffered a non-fatal heart attack. (Bradley would die three years later from leukemia). With Bradley out, the piece, and Peter's work, was shelved, apparently forever, at least until Bowie died.

I was also a producer at CBS News, for the program Sunday Morning.  As a producer I did the lion's share of the work - sometimes all the work.  The 'talent' would generally show up for a day or two, get shot into the piece and leave.  I would research the story, report the story, and write the script. The 'talent' would record the script and appear on air as though they had done all the work.

This is how almost all network news stories are done.

It's Hollywood, not journalism, which is fine once you realize that network news is more about entertainment than information.  But the real tragedy here is the crushing of talent and the squandering of talent.  I am not denigrating Ed Bradley. I don't know him and and I never met him.  People say he was a very nice and very talented man, which I am sure is true.  But I do know Peter Klein, and he was and remains as good a journalist, if not better, than Ed Bradely. But Peter was the Cyrano of 60 Minutes. And he is hardly alone.

It is a crazy way to carry out journalism.

On one of my first assignments with CBS News, I was sent to work with Bob Pierpoint, the White House Correspondent for CBS News.  Bob was also a very nice man and a very good journalist. He had been one of 'Murrow's Boys', he had started his career in the Second World War in the wire services.  You can't cut your teeth better. They don't have 'producers' at the AP or UPI.

But at CBS News he had adopted the practices of the on air 'talent'. He had me do all the work, as all 'producers' are required to do.

On one of our first shoots, when Bob was being shot into the piece conducting an interview, I injected some corrections.  Bob shot me a nasty glance. I injected a few more.

Bob turned to me and said "one of us should go home".

But I also began to realize that I did not want to work like this.  This was not journalism. This was movie-making. So I quit. I quit and bought myself a small hand-held video camera and headed off to the Gaza Strip on my own.  The rest is history. The rest is VJ.

Peter Klein did not 'need' Ed Bradley to do a great story on David Bowie. The story was always there, on the shelf.  The irony tragedy is that CBS would not air the piece sans 'talent'.

I wonder how many other great journalists are crushed by the entertainment machine that television news has become.

And I wonder if the new technolgy of small digital cameras and the Internet can't unleash a whole new generation of a very different kind of TV news.