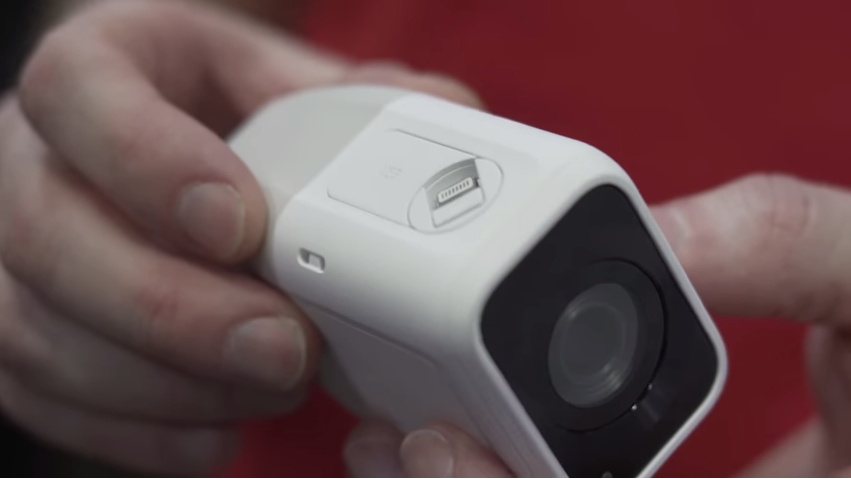 This month at The Photography Show, a trade show for camera manufacturers, Canon displayed a new prototype camera they are developing for smartphones. The camera is small enough to fit in the palm of your hand and connects through a wire to your phone. The high-power camera uses your phone, in conjunction with an app, as the screen for you to monitor your footage and control the camera, and is, as of now, more powerful than the camera that comes with your phone.

Check out this video from Photogearnews taking a first look at the prototype:

Smartphone video production is an exploding industry and in many ways, the cameras on your smartphones are replacing and competing directly with the pricey cameras that companies like Canon make. Clearly seeing smartphones as a threat to their bottom line, Canon is trying to get into the smartphone camera space, but is this the right way to go about it?

Since this is still just a prototype, we can't tell how much better than the phone camera this camera is, but it would only make sense as a product if it was significantly better. Already cameras on phones like the iPhone X, Pixel 2, and Galaxy S9 can rival that of the best DSLR cameras, so it would have to be a serious difference to get consumers, even professional video producers, to use this Canon attachment over the camera they already have with the phone. We're skeptical that it will be enough to warrant whatever price tag they put on it.

This isn't the first time that a camera or lens maker has tried to get in on the smartphone market. Zeiss has attachable lenses that you can put over your phone's existing camera to give it a telephoto, or zoom lens look, RED is about to launch their own smartphone specifically designed for video production, and other companies are working on accessories for smartphones. With this new product from Canon though, it seems to show that the company does not really get the advantage of working with your smartphone. The camera these days, especially for web distribution, just has to be shot perfectly and in full HD (maybe 4K), but the real advantage of the phone is the flexibility you get using it. The phone is so small and unassuming that you can get shots and access that you can't with a DSLR or traditional video camera. Adding more gear to the equation, like Canon is doing, only takes away from that. With this product, you have to hold your phone, and this weirdly shaped camera, or mount it, or both, somewhere.