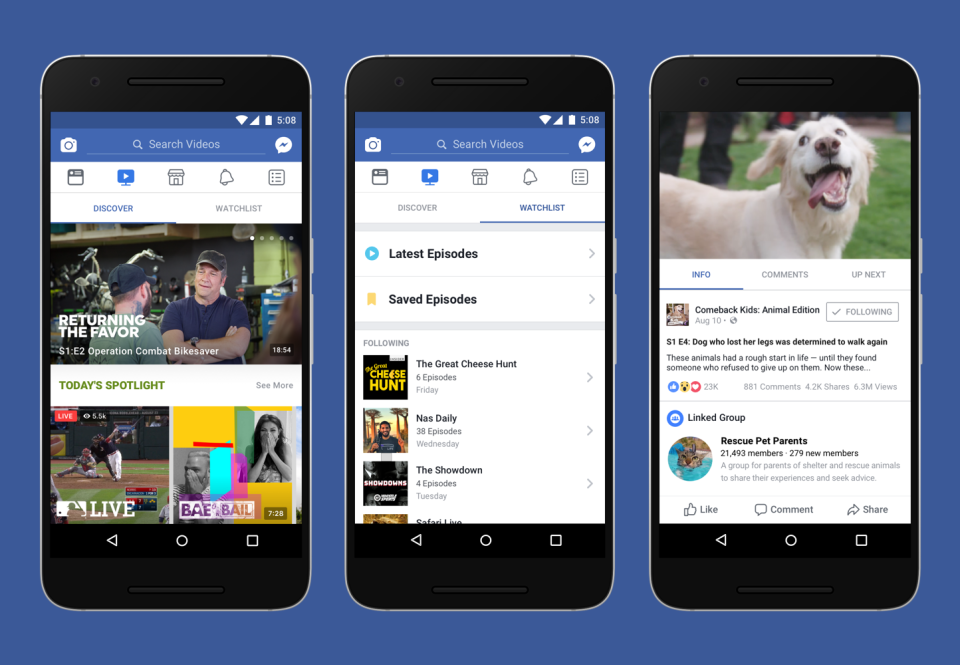 Facebook is taking another step into video. The company that has already admitted that it will be majority video in the next five years and that video content already drives the most engagement on the site is taking another big step into the video arena.

Facebook announced this week that it will be introducing a new section to the site called Facebook Watch. The new platform on Facebook will be a hub for video on the site -- particularly shows that are Facebook first, including some that are funded by the company.

Watch, which will be rolled out soon in the US to select users and then roll out wider globally, will feature shows that are made specifically for Facebook and will feature episodic, live and one off shows. Users will be able to interact with the shows as they would any other Facebook video (likes, comments and shares) and will be able to follow shows and add them to a watch list to keep up with their favorites.

Video has been on the world's largest social network for sometime, and has become a driving force for the platform as they become more video focused. While the video space on the Internet is already crowded, and streaming services (which this can basically be compared to) are a seemingly a dime a dozen these days.

There is little doubt that a move like this puts Facebook in even more competition with services like Netflix, YouTube and Amazon (not to mention the many other streaming services rolling out including one from Disney). The advantage that Facebook has going into this new endeavor is its existing popularity and userbase.

Facebook has already announced partnerships with creators and companies that promise to bring plenty of content to Facebook including Vlogger Nas Daily, The New York Times, Tastemade, and even a game of the week from Major League Baseball.

Since Facebook is a free service, and there is no indication that you will need to pay a fee for the Watch service, we can expect that they will hope to drive revenue from advertising. Additionally, what kind of deals they are making with content creators and produces is also yet to be seen.

What does this mean for you as a creator?

Specifically to Facebook this means that there is another potential outlet for you to sell your work to. It used to be that if you had an idea for a TV show you had 3 channels in the United States to try and sell to and in most cases they weren't buying from outside of the company. Then even with cable, while there certainly were more channels, and demand for content from them, it was still had to sell a show. Now, there are infinite possibilities and selling a show is something that is quite attainable. Just look at Nas Daily, who is involved in the first round of Facebook Watch deals, started just as a vlogger making a video a day or so and using social platforms was able to build an audience and sell his video brand.

More broadly this just shows how the Internet is constantly starving for video content. People go on the web these days mainly to watch video, the only activity that may beat it is shopping. The best way to build your video brand, find an audience and potential clients is through the web.

Start producing and uploading and you too could be selling a show to Facebook in the near future.