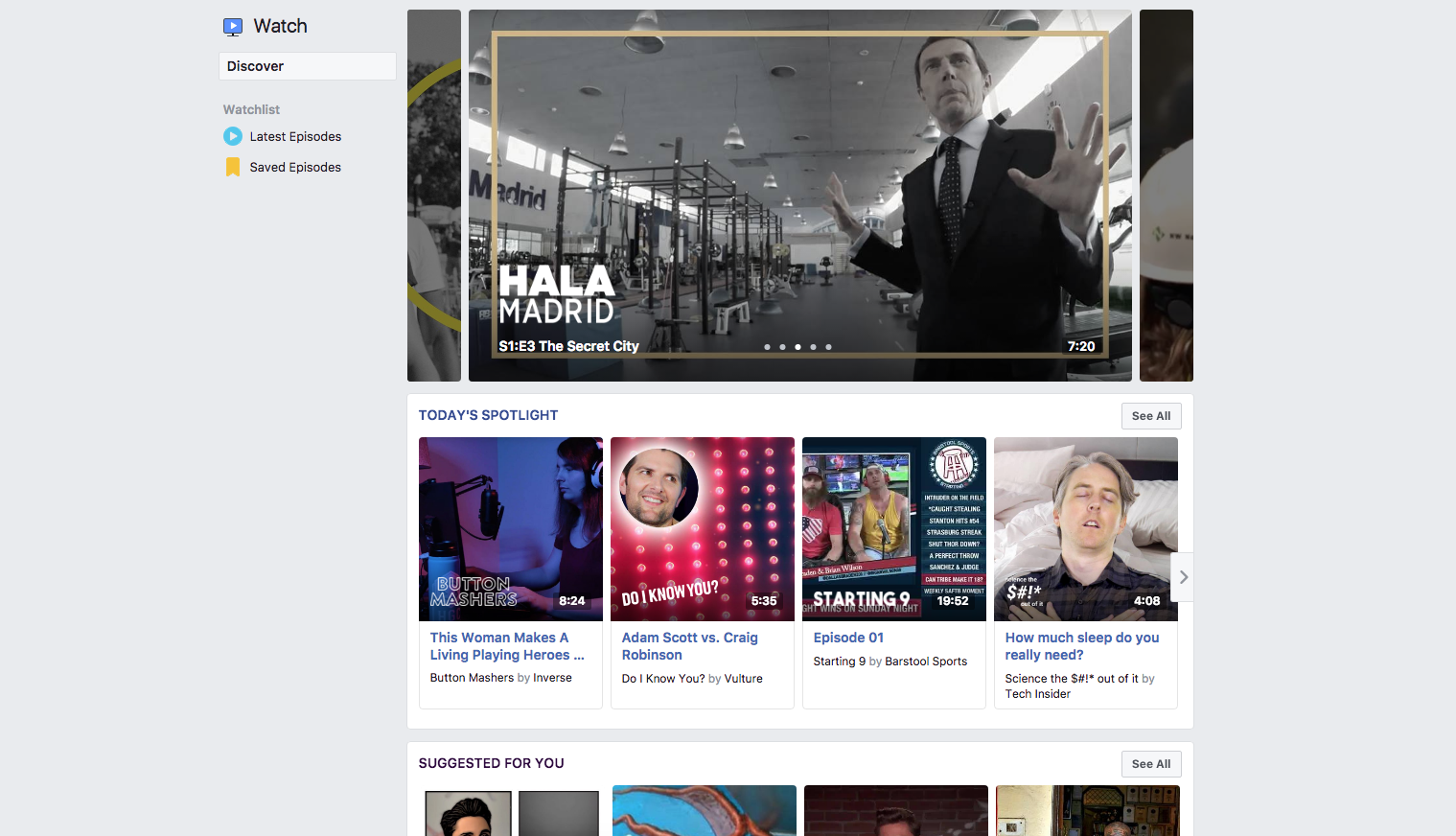 Facebook has begun to roll out it's new Watch feature for users across the world. The new section of the site, which we reported on last month, is slated to be a hub for video content native to Facebook. That is to say that what you see on Watch, you won't be able to see anywhere else.

The section is not for the cat video of the day, or what's new on UNILAD, but rather a place for quality, professional original content for Facebook's many users. Facebook has started with partnerships with trusted content creators, and as we reported over the weekend, plans to spend a billion dollars on original content in the coming year, both through partnerships and original production.

At face value this is just another internet platform shifting its model more towards video and trying to get a piece of the already segmented streaming service share. However, this is really an indication of something much larger.

This move by Facebook doesn't really mirror what any other platform is doing. It's not really YouTube, it's certainly not a la carte TV, and it isn't Netflix either. What it is, is something combining all three and capitalizing on what Facebook already does best.

Facebook's strong point is its user base. It has a devoted base of millions of people around the world who not only spend a lot of time on the site, but generate much of the site's content. These are people who are highly engaged in Facebook. Watch will look to link up that Facebook experience with the experience of watch TV. Facebook is encouraging sharing, commenting and liking on videos, something you don't see on sites like Netflix or Amazon. Additionally, as Facebook has no fee to join, and no ads built into videos, revenue will have to come from other sources like sponsored content and in video sponsorship.

The new tab is available world wide now and already has a lot of content on it, which is an indication for you about how much video content the Internet demands.

So what does this mean for you as a video producer?

This may not mean that your work will be on Facebook Watch, but between that, cable, Snapchat, Twitter, YouTube and others there are plenty of places to sell your work and get commissioned work. Additionally, the rise of content creators who have now cashed in with deals with platforms like Facebook it shows that creating your own channel or website or series of videos is now a viable business. All you need to get a deal with a platform like Facebook or Snapchat is a proven ability to produce quality content, and most importantly a dedicated viewership.

Facebook doesn't (necessarily) have an algorithm that tells them what works and what doesn't in video on the web, but rather they look for what is popular with the user base. Get yourself a dedicated audience, and the money will flow in behind it.

What is the best way to get a dedicated audience?

If you look at who is on Facebook Watch now you will see people just like you who just started producing work, got popular, and were able to swing that into a deal with Facebook. If you look at the kind of content that they produce you will notice that each creator has a niche of some sort -- whether it's travel video, food video, sports, pop culture, or anything in between. The most popular creators find a niche that they can fill and create a whole slew of content around that niche. The niche has a built in audience who you can cater to and grow from there.

Whether you want to make a lucrative deal with a platform like Facebook, or just want to start your own channel, the most important things are still clean shooting and powerful storytelling, but you must also be able to brand yourself and learn about different platforms to begin to grow your video empire.