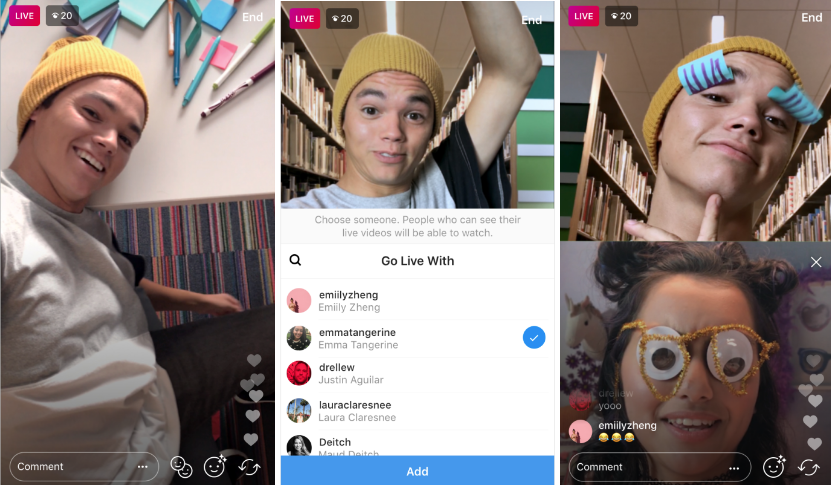 Instagram announced last week that the app now supports going live with another user on the same stream. At the base level this new feature is basically a broadcasted video chat, it has major implications for media and the way we think about broadcasting.

Go Live with a Friend from Instagram on Vimeo.

Instagram's Live feature has been very popular since it was introduced a few years ago and has mirrored the rise in popularity of live streaming more generally. Live streaming has been around for a while, but the technology has only recently been opened up to people across many platforms and made as easy to do as just tapping a button. When live streaming was first made public on Facebook, it was something you could only do on your phone and had limited capabilities.

While it was revolutionary in the way that anyone could now broadcast live to Facebook users around the world and no longer need to depend on a broadcast TV channel or invest millions of dollars on equipment and satellite uplinks, it still was missing some of the more professional aspects of broadcasting. Now, just a few years later, with live streaming featured on many social platforms on the web, it is catching up to traditional broadcast capabilities like use of better cameras and audio, ability to add graphics and pre-recorded material, and now being able to link up your stream with someone else.

Instagram, and Facebook as well, has now introduced this feature to link your stream with another users which is great for interviews, co-hosting, having segments in the field and many other uses that will make users live videos more dynamic. This is something that in traditional broadcast costs a lot of money to do. You need another camera first of all, a separate satellite uplink, and a truck to relay that uplink to the original broadcast. Now, anyone can do it for free with just the phone in their pocket.

Going live with another user on Instagram is very easy. When you go live on Instagram now you will see a new add icon that you tap, scroll through your contacts to select someone, tap their name, and as long as they are ready on the other side will be seamlessly integrated into the live video. You can remove a guest just as easily and add another one right away.

Whether you are a journalist, travel video producer or make any other kinds of videos this will be a great tool for you and your live videos as you interact and connect with your audience. Further, the indication here is that live streaming, on Instagram, Facebook, and other platforms, is only going to get better, integrate more features we're used to from traditional broadcast, and surely change the way we think of broadcasting.