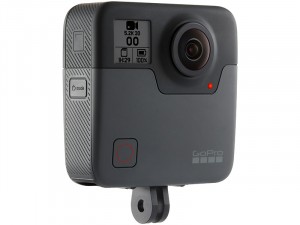 Action camera company GoPro has launched a pilot program for its new 360 degree action camera the Fusion 360. Almost instantly the 20,000 spots filled up and soon the cameras will be shipping and we'll get to see the first results.

360 cameras have become somewhat of a craze in the past few years as more and more people want to create 360 and VR material, and as more platforms like YouTube and Facebook integrate the technology. What is particularly innovative about the fusion is that it records at 5.2K. As it is taking in a lot more than a standard video camera, or even a standard 360 camera, you can find a particular angle in the edit and seamlessly "crop" a 2D 1080p video -- a feature GoPro is calling "OverCapture."

Accoring to the press release, so far the pilot program has involved major brands and influencers like AcuWeather, USA Today, FOX Sports and a few others, but the program is set to expand shortly and they are still taking applications (we just applied).

To apply to become a pilot partner, visit here. By the end of 2017, a limited commercial release of Fusion is expected.