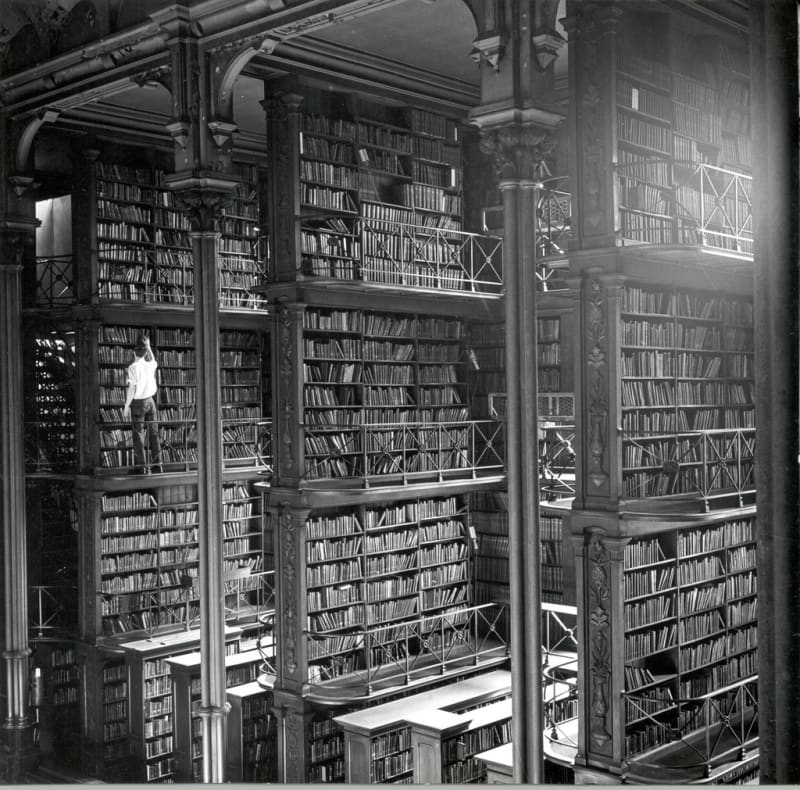 When I was a student at Williams College in the 1970s, we each got assigned a carrel in the Stetson Library.

The library has now been repalced, twice, but my memories of it were triggered by a photo of the Cincinnatti Public Library that was posted on Facebook this morning by Joe Tiernan.

The carrels were individual small desks, sort of, made out of cast iron and both interspersed and suspended, almost hanging in air, in the massive 'stacks', that's what they called them, of level after level of books that made up the Stetson Library.

My classmate at Columbia Journalism School, Stephanie Stokes, has taken the time to find a link to photographs of the original Cincinatti Public Library, and what a beautiful building it was.

Admittedly, the whole notion of stacks and this kind of physical aggregation of books and knowledge have been rendered a bit obsolete by the arrival of the web and Google, which gives you access, at the touch of a finger, to pretty much the totality of human knowledge.  I suppose if you were to build a physical library that held all the books and periodicals and encyclopadae that Google holds, it would be the size of the state of Connecticut - maybe bigger.

The photograph above reminded me so much of the smell and the feel, the physical sense of being in the stacks at Stetson Library. It was musty, but it was quiet, almost Cathedral like, And very much as a Cathedral, by its sheer existence, creates an inherent revernce for God so too did the cathedral like quality of the old Stetson Library create a physical veneration for books and knowledge.

And this is what has been lost.

In the play Inherit The Wind, the fictionalized version of the Scopes Monkey Trial, Henry Drummond, who represents Clarence Darrow in the real trial says:

“Progress has never been a bargain. You have to pay for it.
Sometimes I think there's a man who sits behind a counter and says, "All right, you can have a telephone but you lose privacy and the charm of distance.
Madam, you may vote but at a price. You lose the right to retreat behind the
powder puff or your petticoat.
Mister, you may conquer the air but the birds will lose their wonder and the
clouds will smell of gasoline."

We pay a price for each piece of technologcial progress that we make. Our life becomes easier but we lose our connection to the thing that we are doing.

There is, I think, a deep desire to re-connect with that physical presence.

That is why you see a resurgence of vinyl records in an era of streaming music that is free.

From my own perspective, I like to write on a typewriter and even more with a fountain pen. What you discover when you write with an ink pen is that, unlike a computer or a phone, you have to think before you commit to the paper. There is no delete function.

When it comes to photography, I very much miss the days when you went to the darkroom and processed the photos one by one in a chemical bath and saw the images magically appear.

When you could ony shoot 36 exposures to a roll of film, you had to think and compose before you hit the shutter button.

When we teach our VJ courses, you'll note that we strive for a 1:1 shooting ratio - think before you shoot.  Compose the shot and the story in your head before you start to record.

It's all part of a desire to get back in touch with some sense of reality, before it is lost forever to a digital world, which may be simpler but in some ways is far less rich or rewarding.

This spring, in England, we will go back to planting our vegetables.  You can buy them at the store, but in many ways, the home grown taste better.  I don't know why.