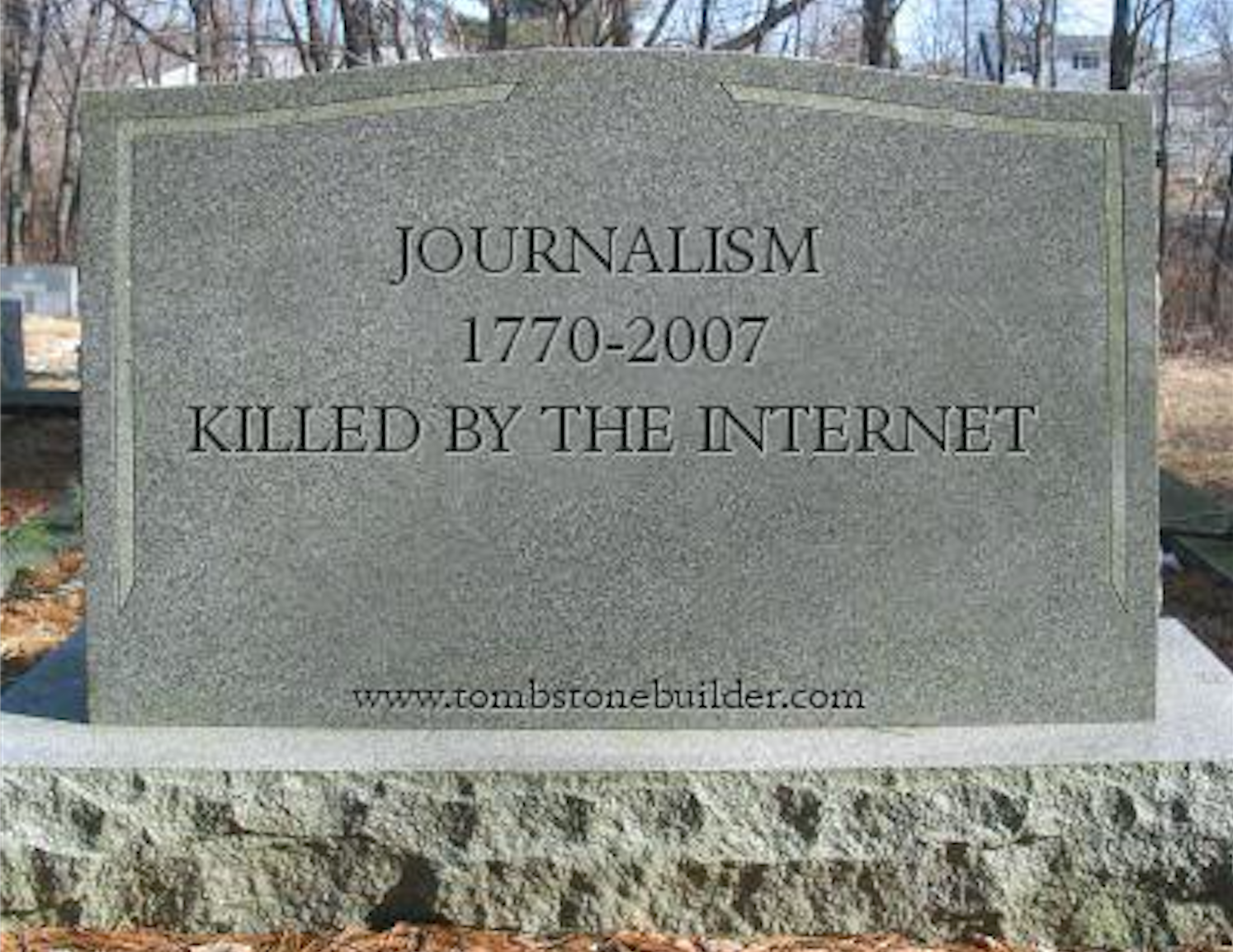 On May 4th, I will be speaking at MojoCon in Galway,Ireland.

It's a gathering of MoJo, or Mobile Journalist (what we would call VJs) from around the world.

The topic of the discussion is: Is Journalism Dead?

My answer is a very simple one: Yes.

Not only is it dead, but we collectively committed suicide.

What killed journalism, of course, was the Internet.

It didn't seem that way in the beginning. It seemed that the Internet, which would suddenly give journalsits both access to all the information in the world without having to go to a newspaper's 'clip file' (yes, that was what we used to have to do), AND the added bonus of publishing your work for the entire world to see, without the need for paper or a printing press seemed, well, like a gift from heaven.

What it turned out to be was a poisoned chalice.  Beacuse the other thing that the Internet did was to cut out any revenue for the people making the content - us, the journalists.

The Internet was (and is) all about aggregating, sorting and distributing information. That, as it turns out, is also what the practice of journalism is all about.

When the Internet was invented, we (the journalsits) should have owned it.  It was, after all, all about what we did.

But we didn't own it. We didn't even come close.

Instead, it was co-opted by a bunch of geeks in the computer lab. (Sorry, but true).

It was THEY who made billions on our turf, and they who would remake a world where platform was worth everything and content was worth nothing.

And we not only watched it happen, we reported it! (How dumb are we???)

And now, our idea - the very heart of journalism (which is not all that old, by the way, not like law or medicine) is taken for free and used to sell advertising, which generates hundreds of billions of which we get nothing, or next to nothing.

We have to re-think how our whole industry works.

I first attended and then taught at The Graduate School of Journalism at Columbia University.  That school was set up by Joseph Pulitzer as a kind of training camp for the journalists who woudl sweat in his newspapers like factory workers. From the very begining we were cast as employees.

Tell me, which is more important today in the 'informationa society'?

But lawyers cleverly arrange themselves in partnerships and charge clients for their services.  Journalists don't, but they could.

Journalists could form the same kind of partnerships that lawyers do - and license their content to whomever wanted to license it, from the NY Times to NBC to Facebook.  After all, what is The NY Times but the aggregate product of its journalists. What is any news business but the value of its content.  Take away the conten and what do you have?  Blank pages.

As partnerships, journalists would own equity not just in their work, but also in the value of the partnerships that they set uo.  And they could control where and how their work was used, and what they got paid for it.

They could even hire fancy law firms to protect their IP.

The plantation system of journalism might have worked in the 1930s or 1950s, but today, the combination of the power of the web to distribute (and the power of iPhones to replace million dollar investments for video) has obviated the old model. Clearly.

It is time to think of something new.

I think this could work.