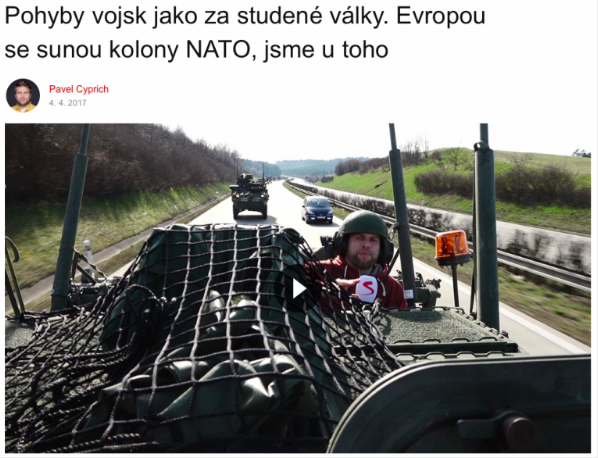 A video news report made entirely on the reporter’s mobile device as he travelled through Poland with a US army convoy.

How Video is Changing the News in the Czech Republic

Two Czech publishers are using video almost exclusively in their news operation to drive web traffic. DVTV, a popular web-based TV platform, and Seznam Zprávy, a daily news site use video for news stories, live broadcasts, interviews and investigative reports, and the results have been extremily positive accourding to a report in The European Journalism Observatory.

According to Jan Rozkosny, DVTV’s editor, the investment paid off. He reported that, according to metrics from Google Analytics, the site reached 5.5 million unique users in January 2017. The average time spent on one video page is 11.5 minutes, Rozkosny said.

Both platforms are relatively new ventures, DVTC starting in 2014 and Sezam launching in 2016 and they have utulized all kinds of new technologies in their operations, be it live streaming, smartphone videos and more.  Their reletive youth in the world of publishing gives them an advantage in trying out new modes of storytelling and allows them to focus on digital first.

Seznam hired Jakub Unger, an experienced journalist, to run Seznam Zprávy. Unger was one of the original founders of Aktualne.cz, the Czech Republic’s first digital-native independent news project. Before that, every Czech news site had been supported by one of the larger news publisher or broadcasters.

The two platforms also benefit from the spread of mobile devices in the country, more engagment in social networks, and better internet speeds. According to the report:

The growth of video in news has been enabled by improving Czech mobile networks, which now provide sufficient download speed for video content.

Another contributing factor is the increase in media advertising spend in the Czech Republic overall (up 8% overall in 2015). Online ad spend has become a significant proportion (20%) of the total media market – the same level as print, which is on a downward trend, according to the Reuters Institute Digital News Report, 2016.

This is something that you could do, maybe not on such a large scale, with just a few people and a website. This is basically an independant TV channel on the web, with content that you can watch a la carte anytime and any place. We recently featured an article here on VJ World about a group of journalists in the U.S. who are doing similar work to give coverage to stories not covered in the mainstream media.