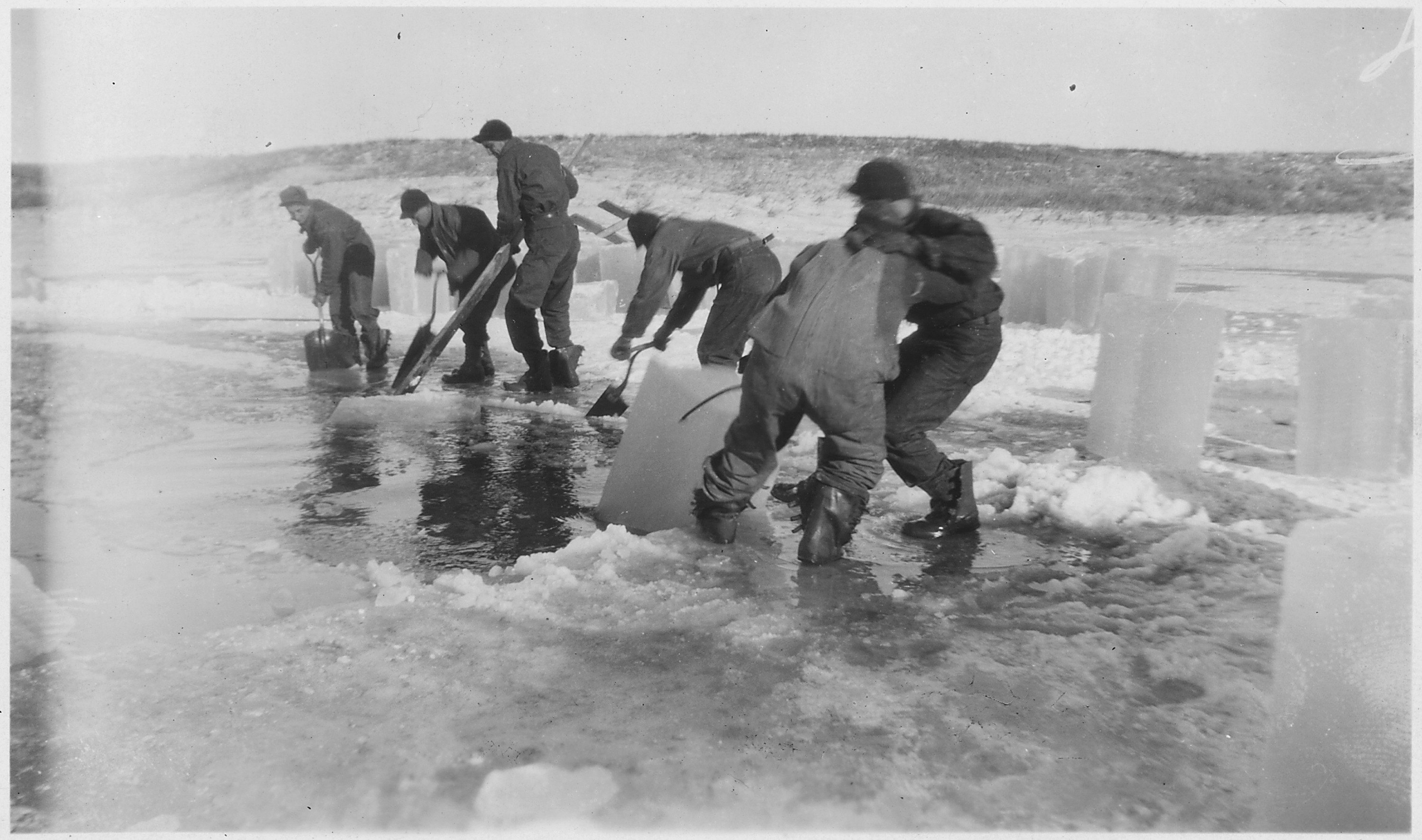 On Sunday morning, the museum’s president, Ken Lincoln, began sawing his way through the ice using the same exact tools the original owners would have used in the 1800s.

According to the museum’s website, the ice house was built in 1826 after Asa Thompson dammed a small brook and created Thompson Pond. At first, he only cut ice for his farm. He started a business when his neighbors expressed interest in his ice.

Today, harvesting ice in Maine is a kind of festival to celebrate a past.

But for hundreds of years, if not thousands, ice harvesting and ice itself, the product, was a massive industry in the United States.  Ice ponds dotted New England, and ice was cut out of the frozen ponds, stored in ice houses and then shipped to Boston, New York and even Washington DC.

Almost every home had a ice box, and the ice man would weekly deliver a new block of ice to presrve and cool food.  Ice was even packed into ships that left Boston and took what ice survived the passage as far away as India.

Ice was a gigantic business.  If you owned an ice pond or an ice house or an ice delivery route or built ice boxes you were set for life.

Then, in an instant, it was all over, with the invention of refigeration near the end of the 19th century.

Killed off by a new piece of technology.

This happens all the time,  A stable, successful business is killed in an instant.  Technology is irresistable, and once unleashed, it cuts a swath through companies, industries and people's lives like a sharp scythe mowing down acres of grass. Nothing survives.

The newspaper business encountered its own deadly scythe with the arrival of the Internet in the 1990s, and once paramount and powerful industries owned by the likes of WIlliam Randolph Hearst, the Sulzbergers, The McCormicks - people who had been kingmakers, were reduced to a tiny shadow of their once former power and wealth.

Now comes the smartphone and the Internet, who are going to do to television news and networks what refrigeration did to ice boxes - kill them. Or at least create something very different.

The Thompson Ice House Preservation Corporation was founded in 1987 to rebuild and run the ice house as a museum.

The Thompson Ice House Harvesting museum has been in operation since 1990.

The museum website said the Thompson Ice House is the only ice house on the National Register of Historic Places that continues to store naturally harvested ice.

Ice harvested on Sunday will be used for parties, fishermen, boaters, hunters and others who need to keep food cold throughout the year. It is also used to make ice cream for the museum’s ice cream social in the summer.

Perhaps, one day, in the not too distant future, the Museum of Broadcasting will, once year, haul out its cameramen, sound people, on air reporters and producers, who will, to the assembled, appear as nothing so much as the folks who dress up as Benjamin Frankin in Philadelphia, or the nice people who cut ice once a year in South Bristol, Maine.