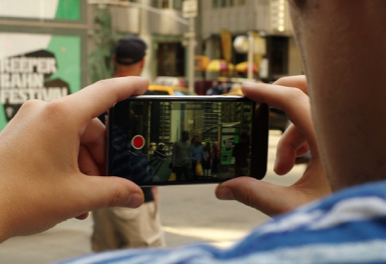 If You Didn't Shoot It, It Didn't Happen

Email
Television is the most powerful medium in the world, but the least democratic.
Even though television news sets the agenda for almost all our conversations about public discourse,the topics and news stories are selected and controlled by a tiny handful of media companies and their employees. This makes for bad television. It is in stark contrast to the world of print, which is inherently open to anyone who wants to participate.
The advent of the smartphone and the Internet now mean that the hitherto closed world of television is open to everyone as well. But only if you pick up your smart phone and start making content.
The mission of TheVJ.com is the democratization of this medium. We aim to do for television and video what the printing press did for the written word - open it up to everyone. And that begins with acquiring the basic skills of video literacy, and the understand that participating in the world of video. Public discourse is not just your right, it is your responsibility.
Start a Free Trial
Start a Free Trial Now