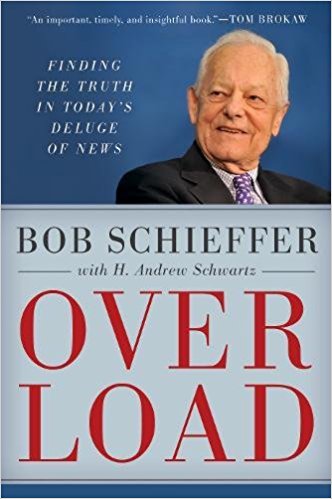 I am reading Bob Schieffer's new book "Overload: Finding The Truth in Today's Deluge of News".  Schieffer is the 'journalist emeritus' at CBS News, having anchored Face The Nation for years, and is now a regular on CBS This Morning.

While the bulk of Schieffer's book is about the impact of new technologies on the journalism business, he makes some very cogent observations on the 2016 election. (As the long time host of Face The Nation, I would expect no less.

One point that he makes, that many others have made as well, is that Hillary Clinton failed to connect with the great mass of "Middle America".  She was viewed as an arrogant outsider, more reflective of the Washington/Wall Street establishment, the very power establishment that Trump endlessly attacked.

Trump won for a reason. Despite the fact that he was a billionaire New York property developer, he was also seen as a champion of those without a voice and without power in America.

However, when it comes to examining the impact of 'new' technologies on journalism (Facebook, Twitter, Instagram, etc..), Schieffer is aghast at the rise of these new voices and the threat that they represent to the 'established order'.  The established order in this case being things like CBS, NBC or The New York Times.

He understands the rise of populism in politics and the danger of failing to pay attention. He cannot see the same exact rise in the media and journalism business.

Facebook, Twitter and more than anything else, smart phones have empowered a whole group of people who were hitherto powerless to have their voices heard.

Millions and millions of people in Iowa or Pennsylvania or Ohio or Kentucky have smart phones. Millions. And they all have stories to tell.

But the networks are not listening to them. Oh, they may send a 'reporter' to Kentucky or West Virginia to do a 1:20 story on opioids or coal mining, but that is about it.  There is a certain arrogance to this.  The same kind of arrogance that killed Hillary Clinton.

We deign to pay you a visit.

And the networks and mainstream media may be in for the same kind of shock that the Democratic Party experienced in 2016.