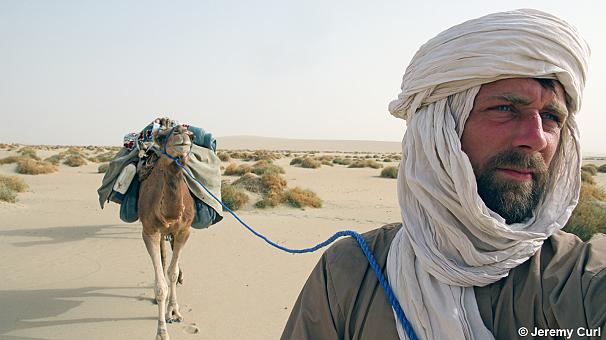 A few years ago we met Jeremy Curl.

In fact, you generally don't meet people like him in a lifetime.

I don't mean a TV adventurer like Bear Grylls

I mean an honest-to-God real life adventurer and explorer.

In 2008, Jeremy crossed the Sahara with the Touareg tribes that live there, photographing their harsh way of life and the bitter skirmishes they fight that are currently splintering the Sahara. He covered two thousand kilometres on foot and by camel, arriving in Timbuktu after crossing the Tanezrouft, the most arid part of the Sahara that the Touareg call the “Land of Terror”, becoming the first in living memory to do so.

Jeremy pursued a career in adventure after navigating the Potaro River to the Kaieteur Falls with the Amerindians of the Amazon. Since then he has worked in the Middle East, most notably Iran and Kurdistan, and throughout Asia and Africa. In Cuba he interviewed the Castro family about Cuba’s political future. He is one of few foreigners to have lived in the break-away republic Transnistria, a post-Soviet frozen conflict zone between Moldova and the Ukraine. He returned having taken pictures that have never before been seen outside the Republic. Jeremy has crossed the Kaisut Plain, the Ndoto Mountains and the Koroli desert in Northern Kenya by camel, explored the wild tribal lands west of the Omo River in Ethiopia and has led camels into the Danakil desert, nicknamed the ‘cruellest place on Earth’.

But a few years ago, we taught him to shoot and edit his own video, and now he is also a documentary filmmaker.

Most recently, he was in Georgia, ( not the one in Atlanta), camera in hand.

Here is what he shot - or at least the trailer

He has lead an amazing life.

If you would like to learn more about Jeremy, you can read all about him here.

Without a doubt, one of our greatest success stories.