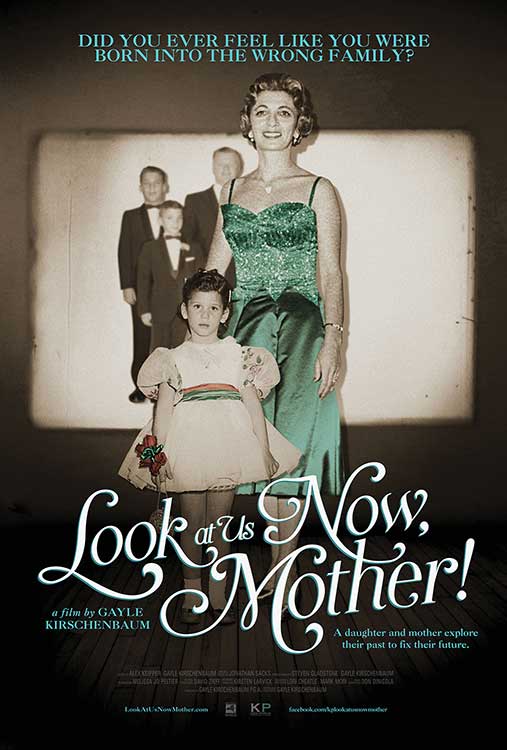 Make Your Own Documentary Film

Did you ever feel like you were born into the wrong family?

And I thought I was the only one!

I particulary thought this way when I was in junior high school, a traumatic time for everyone, except the 'cool kids', of which I most decidedly was not.

One of the cool kids sat in front of me in english class.

So cool, I was afraid to talk to her.

Her name was Gayle Kirschenbaum.

A few years ago, she appeared at my video bar/cafe, The DV Dojo, on The Bowery.

I had not seen her for, oh, 30 years. Maybe more. She was what we called an aspiring filmmaker, and she was working on a film called Dogamentary - about her and her dog.

I was happy to offer what advice I could, although truth be told, I did not think it had a lot of commercial potential.

Now, perhaps a decade later, she has emerged with a self-made, self produced, self shot success.

This week, Lisa and I went to an advanced screening of Look At Us Now Mother, her newest film.

When you want to write, people say, 'write about something you know about'.

(This advice, by the way, has not stopped the rejection notices coming in for my own novels).

The new technology of small, simple cameras and edits, we always say, puts filmmaking on the same level as writing. It's simply a matter of applying your innate creativity (if you have some) to the idea. The tech pretty much takes care of itself (with a few simple lessons).

Had Gayle written this as a memoir, it would be up there is Gary Shteyngart's memoir, (and best seller), Little Failure. It's the same genre.

Instead, she has made a film.

And it is just as good, just as compelling, just as deeply introspective and frankly, I think, better written.