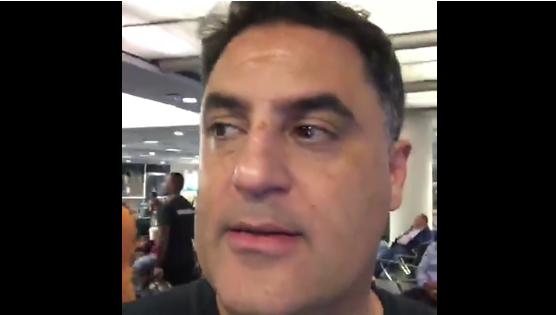 What was once just angry tweets, has now become angry live streaming.  Consumers have been taking to Facebook and other's live streaming function to complaing about companies and products.

Live streaming is currently in the process of disrupting the way we consume content.  Everyone from celebrities to your neighbors are live streaming to reach wide audiences and cut out the old models of distribution.  This disruption, however, has many unitended consiquences as well: an extension of a phenomenon we have already seen on twitter: angry consumers.

Friend of the site Jeff Jarvis writes for medium about this phenomenon:

Watch out companies: We customers have a new way to complain … live … with an audience … in video … with proof. An angry video is worth a thousand angry tweets.

That big head above is The Young Turks’ Cenk Uygur after waiting, waiting, waiting and then being kicked off an American Airlines flight because he dared complain. He documented the entire sad saga on Facebook Live.

So now, when a company screws with a customer, expect that to happen before an audience. No longer can one nice person stuck at a desk in Dubuque answering angry tweets handle a shit storm. Certainly, a robot can’t do the job. (Cenk tweeted his video and the robot response: “We’re sorry for the unexpected delay. Please DM additional details so we can take a closer look at what’s going on.”) Now every “customer service” employee in a company will have to be ready for his or her closeup on Facebook Live. Smile, stone-faced “supervisor,” you’re on Facebook!

It’s perfect that Cenk demonstrates the power of Angry Facebook Live. He knows how to rant before a camera; he has made a career of it. So he took to Facebook Live like a bear to a salmon stream. He uses it to stump for Bernie (love ya, Cenk, but Hillary’s the winner!). He gets into hotel rooms and shares his anger at having only one bar of soap. It helps that he does have that big head that fills the screen and demands your attention. But Cenk doesn’t succeed in Facebook Live because he’s a TV pro. No, to the contrary, he succeeds because he does what we all can do now: just talk to people.

Read the full post and check out Jeff's examples here.