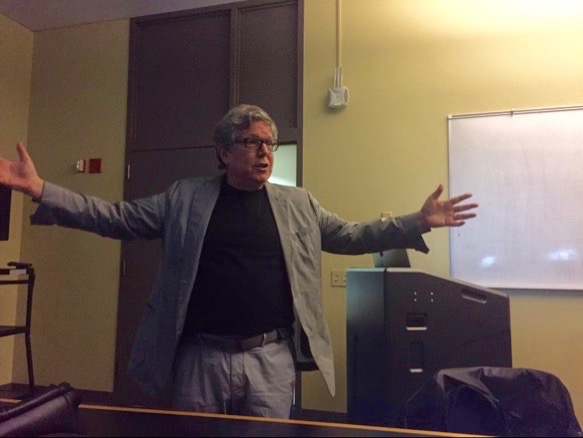 Get out there and make a fortune.

Twenty years ago, I was asked to resign from my Adjunct Professor job at Columbia University's Graduate School of Journalism.

There were several reasons I was asked to resign (let's not go there right now), but paramount amongst them, according to Dean Steve Isaacs (as he later told me), was that I was telling the students that what the other faculty members were teaching them was wrong.

"That doesn't matter," Isaacs retorted, "you can't do that."

Now, I am back - at least part time - thanks to Dean David Klatell. Let us hope he does not regret his decision.

Yesterday, it was my time to 'review and critique' the students' final video pieces.  For those of you who have experienced our 'Public Praise/Public Humiliation' sessions in our video bootcamps (next one in London this July!), you know what I mean.

I think that the largely sheltered generation of current students, seeking a 'safe' place at a university were probably not ready to hear the truth ('You can't handle the truth'... who said that?); but they all took it pretty well.  (Look, they're students. What do you expect?). My philosophy has always been if it sucks, say it sucks.  There is no point in saying 'great job' when it is not.  TV audiences don't care and if you put someting bad on the air or on line they will go away and never come back.

Anyway, after the screening we got down to the bottom line. They have all invested a jaw-dropping $65 thousand for their 9 months at Columbia, and now they were facing graduation. What kinds of jobs should they be looking for, they asked.

The television/video world is undergoing a massive revolution. When I graduated from the J-School, if you wanted to work in TV you got a job at a local TV station or a network (I went to PBS) and worked your way up the ladder.

The television/video business is HUGE.  Bilboard Magazine estimates it at $2 Trillion a year, but who really knows. Where once there were a few networks and TV stations, today video is everywhere - from 1,000 cable channels to limitless online video to video in elevators (or lifts, as Lisa say).

And it's a $2 triilion apple cart that is turning over. So go pick up those apples.

So here's my advice:

That has all been blown away.

Got an iPhone and an idea?

That's all you need.

(That as some basic instruction on how to make stuff people want to see... and how to market it).

So, as I told my students at Columbia - 'follow the money'

There are literally billions of dollars lying on the video table. Grab some.

And the best way to do that is to start making stuff.

The worldwide market has a never-ending appetitie for stuff.

You have nothing to lose but your student loans.