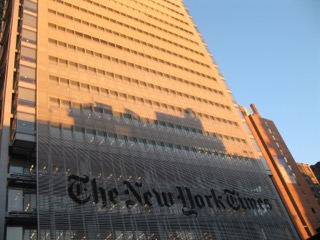 Michael takes to the pages of The New York Times to discuss the death of network news and impact that digital platforms and smartphones will have on the media.

Network News is dead. And it should be.

The idea of paying someone $10 million a year to work 22 minutes a night to sit in a chair and read something someone else has written for them is both a waste of money and a waste of everyone’s time. Time to wrap it up.

When television came of age in the 1950s, God did not descend with a stone tablet saying "Thou shalt have an anchorman." That was a function of the best technology of the time.

In those days, television programming was expensive to make and complicated to transmit. Analog signals were pushed through the air to reach people’s homes. The technology has moved on. The networks have not.

By the time the network news comes on their air today, nothing on it is "news." Because of its limitations, stories are kept to a minute, 20 second. Only a very few stories can be told at all.

In an era in which 100 hours of video are uploaded to Youtube every minute, the very notion of spending hundreds of millions of dollars to craft a single half-hour per day is beyond idiotic.

Today, there are nearly 2 billion smart phones in use around the world. TV executives like to think of smart phones as little TV sets that people have in their pockets. What those executives fail to realize is that each of those smart phones is also a complete TV studio – a place where anyone can create, edit and upload their own video and share it with the world, for free. Almost 2 billion "reporters" around the world, ready to go, live, 24 hours a day – to report on exactly what is happening to them – from Syria to India to Mali to Los Angeles. Compared to your anchor and a dozen correspondents, it’s pathetic.

Almost no one under the age of 30 even watches network news. Most get their news from Twitter or Facebook or Instagram. There are no network correspondents on Twitter or Facebook or Youtube. And there sure aren’t any anchors getting paid $10 million a year to read the tweets to us. Nor are there any editors deciding the order in which we should read them.

Are the TV networks capable of creating video journalism fueled by the incredible potential of digital technology? Probably not.

Newspapers could have invented Craigslist, but they could not bring themselves to do it. Kodak could have owned digital photography, but they could not give up on film. TV news organizations could give birth to the next generation of online video news, but they are far too wed to their anchormen and their bloated salaries and extremely limited content.

Too bad. But, as one old anchorman used to say, ‘That’s the way it is.”

See the full article here.  Join the conversation in the comments!