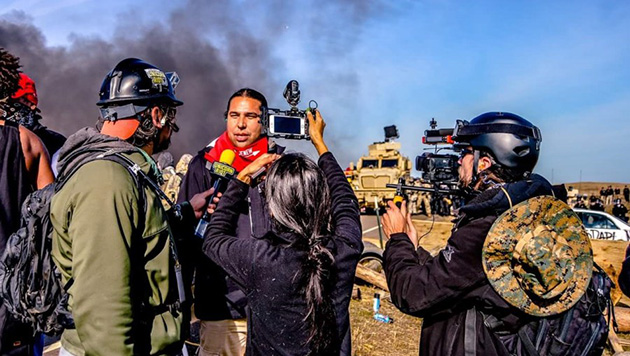 Mother Jones: This Guerrilla Media Outfit Goes Where Many Journalists Fear to Tread—on a Shoestring

In late 2016, at the protest camp at Standing Rock, North Dakota, a media collective called Unicorn Riot showed us the the future of journalism. Armed with nothing but smartphones, some GoPros and consumer camcorders, they filled a journalistic void, and did it in a personal way that made them incredibly popular on social media.

Unicorn Riot was born in 2015 out of a need to cover the Black Lives Matter protests by a half-dozen people who wanted to cover the story in a different way. They saw traditional news outlets coming to cover protest and were not satisfied with the coverage. The news crews would show up, set up a live shot, the reporter would do his piece and they would go home. Additionally, the only coverage they saw getting any real airtime focused on clashes with police and further violence rather than the underlying story of the protests.

They decided that they would tried to fill this void, and they would do it using guerrilla tactics: embedding themselves with people, using small cameras and individual VJs. Moreover, they would distribute using social media and circumvent the traditional top-down news apparatus.

Unicorn Riot continued covering stories this way and then they found the story that made them a name: Standing Rock.  They saw such minimal reporting on this story, they knew they needed to go cover it.

This is a great example of how journalism can be in the 21st century. No longer being dictated by the powerful news companies, but rather dictated by the issues and popular opinions. It no longer requires thousands (or even millions) or dollars to cover any news story anymore; with nothing but a smartphone you can make something broadcast quality. The barrier to entry is basically 0 now, so all it takes is a commitment to the work, which most journalists already have. This is the way that journalism can be. Journalists producing content that is not dependent on the networks, that survives because of public interest and is not beholden to any investor. Keep on eye on this model, because we're going to see more of it, and most interesting will be how the media companies respond.

WES ENZINNA from Mother Jones shares some history on Unicorn Riot and embedded with them:

On a November morning at the height of the Standing Rock standoff, dozens of anti-pipeline protesters stripped off their parkas and dog-paddled in their underwear across the Cantapeta Creek, an icy ribbon of water that wends into the Missouri River. Their goal was to reach sacred Sioux burial grounds on the creek's far side before the cops and security guards could evict or arrest them.

As police assembled on the opposite bank, fingering rifles and tear-gas canisters, Lorenzo Serna, a co-founder of the media collective Unicorn Riot, leaped into the water. He wore black shorts and a helmet with a GoPro4 Plus camera mounted on it. The scene he captured was emblematic of the confrontation in North Dakota: When the protesters had nearly reached the shore, the police unleashed torrents of tear gas into their eyes as they shivered in waist-deep waves. Serna's footage was viewed by thousands of people on Unicorn Riot's Facebook page. But what you can't see is that, behind the lens, Serna shivered with the protesters, swallowing mouthfuls of water and tear gas to get the perfect shot from, literally, a fish-eye view.

Unicorn Riot has been around since 2015, but it found its voice—and its audience—at Standing Rock. It also found trouble: Serna will stand trial in North Dakota on May 5 for trespassing and rioting charges stemming from his coverage. Founded by a half-dozen friends and acquaintances from Minneapolis, New York, Boston, and Denver, the group was born as an effort to cover Black Lives Matter protests in Baltimore and Ferguson from "the movement's perspective, but with some critical distance," filming guerilla interviews and footage of demonstrations with cheap camcorders, GoPros, and livestreams. Serna had experience as a producer at Fusion, his co-founders were anarchists and media activists, and together they wanted to create "narratives from the street" with an aesthetic that mixed agitprop grittiness and new-media slickness. They would be "video ninjas…jumping in and out of things…without getting caught." The name Unicorn Riot captured the absurdity of their ambitions.

Equal parts Vice and Democracy Now!, its hosted segments featured Serna, who is 36, holding a goofy yellow ice-cream-cone microphone and cracking jokes while tear-gas canisters soared overhead and police snipers pointed rifles at them. In one videofrom November 2015, co-founder Niko Georgiades interviewed white supremacist Allen Scarsella at a Black Lives Matter demonstration in Minneapolis. Scarsella had heard about the protest by watching Unicorn Riot's livestream before showing up and demanding to be on camera. "It's almost as if they expect one of us to do something," Scarsella told Georgiades on the livestream. "It's boiling." Four days later Scarsella returned and shot five African American protesters.

Today, the collective has a revolving cast of about 18 producers and writers who swap hosting duties. "It can be stressful and scary," Serna said, "but there's a lot of joy that comes with reporting. Being able to tell the story in the way that we want to brings me joy. It makes me happy, and humor is an expression of that."