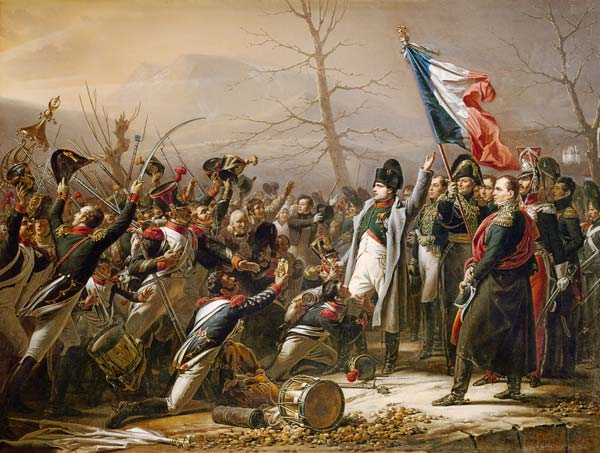 Napoleon and The News

For the past five years, I have been spending every summer studying Modern European History at Oxford University in Britain.

There is a lot to be said about going back to school at my age.

When I was a student at Williams College in the early 1970s, I spent most of my time trying to figure out how to get away with doing the most minimal amount of work possible and still get a good grade.

(This is why I think increasingly that paying $65,000 a year to send an 18 year old kid to school is a total waste of money - but that is another story).

At any rate, I am already enrolled for Summer 2018, and this summer I will be taking a course on Napoleon.  This is a logical follow up to my course last summer on The French Revolution.  At this rate, I should have all of Europe pretty much under my belt by the time I am about 132 years old.

One of the things I like about the Oxford program is that they send you a pretty comprenhensive reading list to prepare for the course, and so, of course, I am deep into Napoleon.

Needless to say, he was a unique personality in history - far ahead of pretty much all of his contemporaries, and interestingly, still has lessons for us. One of them is for video and television, ironically.

France in 1789 and following the Revolution was a mess. It was a shattered and falling apart. But in only a few years, with Napoleon at its head, France went on to conquer most of Europe and unite the continent.  (My innate Anglophilia prevents me from waxing too eloquent on this achievement, but let's say it was mightly impressive).

Well, one of the ways he did it was with the Grand Armee.

Prior to Napoleon, wars on the European Continent were fought by small and highly trained professional armies.  Dressed in magnificent colors with great hats and feathers and gold braid, they trained endlessly, were well paid, and when wars came, which they did all the time, the Duke of whatever or the Count of wherever could march is well trained and highly polished army in the field to meet with the equaly small but professional army of the Emperor of Austria and anyone else.

Napoleon turned all of this on its head.

Instead of working with a highly trained French professional army, led by the aristocracy; the Revolution had opened the door to something new. Of course, most of the aristocrats had either fled or met with the guillotine.

Unlike all the other small professional and elite armies of Europe, the Grand Armee was enormous.

The professional armies of the European powers in the early 19th Century might number 20 or 30 thousand. They were expensive to maintain. Napoleon drafted peasants and everyone else in to his army, trained them, and reached the then astonishing number of 680,000.

Combined with this military genius, was it any wonder that in a very few years he was able to trounce pretty much all of Europe (except Britain!).

Now, what does this have to do with video?

Today's major media companies like CNN or The BBC or NBC have really only a tiny handful of highly trained and 'professional' journalists or reporters or camera operators or editors on their staffs. They are well paid and highly polished, but like the armies of Europe in the 19th C, small and elite.

There are 3.5 bilion (wth a B) people around the world now who are in posession of iPhones and smart phones.  Each of those phones can shoot 4K video, edit, add music, graphics and 'send' their product anywhere in the world for free.

That is a Grand Armee of reporters that no one is using.

What is lacking is the Napoleon, who can organize them and tap into this vast and overwhelming reporting resource.

Having seen what Napoleon did, every other European nation got the idea and by the end of the 19th Century, they all had massive land armies (except Britain).  The Russians had nearly a million men under arms. The world was changed.

Media companies will ulatimely do the same.

The untapped value is too vast.