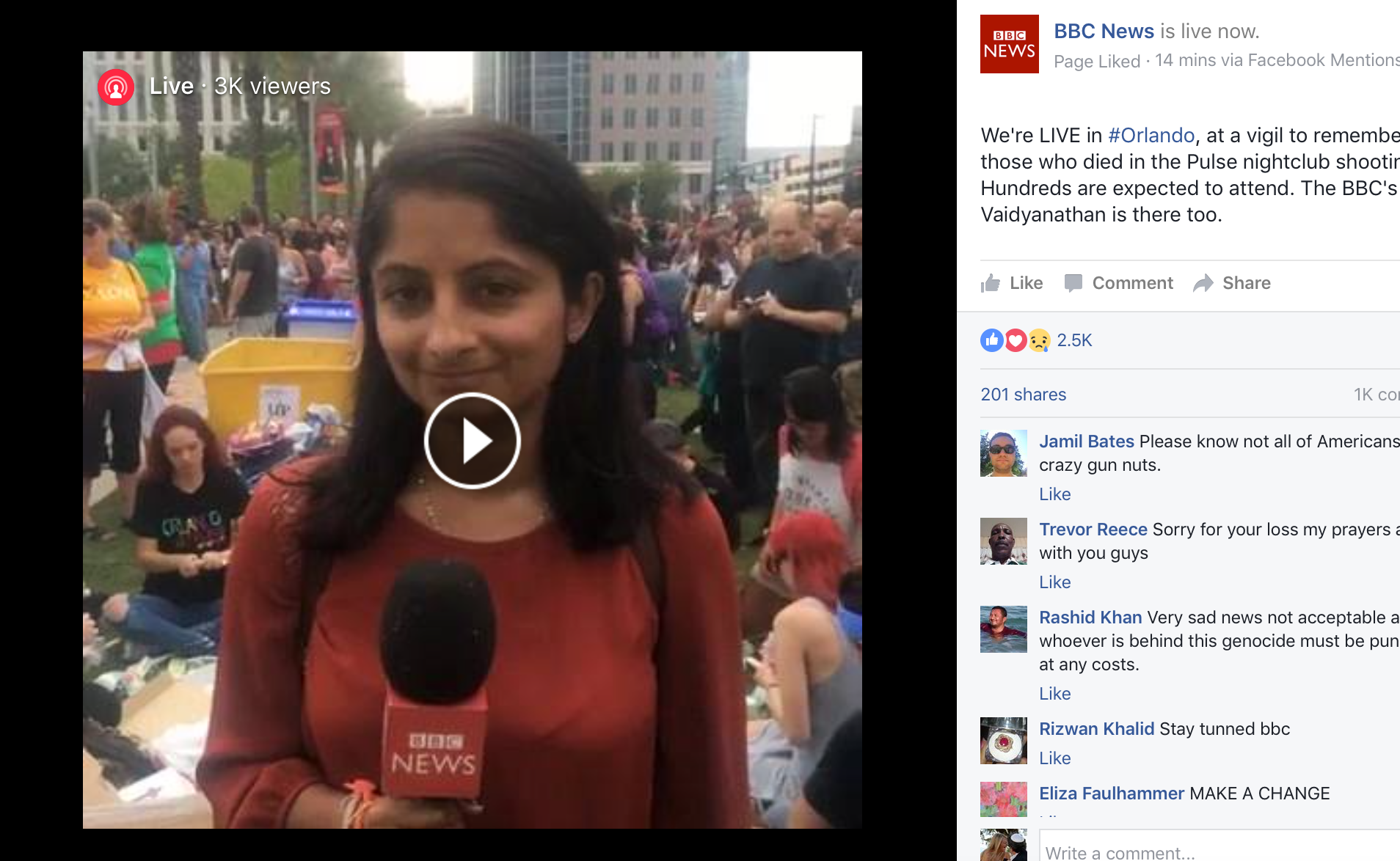 A basic fact of history is that when new technologies come along, established businesses tend to plug the new tech into old ways of working.

The result, generally, is disappointing at best.

Live Streaming Video is jsut beginning to emerge as a very interesting technology.  To my mind, it is a game-changer.  And, as could be expected, we are beginning to see many conventional media companies putting their toe in the water.

This week, Orlando has been ground zero for pretty much every media company in the western world, and, as to be expected after every tragedy, they have dispatched their teams to 'report' from Orlando, after the fact.  Let's call this riding the coat tails of a tragedy for ratings points.

Personally, I don't see much added value in having network anchors standing the the middle of a highway in Florida reading copy (in the rain no less) as opposed to anchoring from a studio in New York, but what do I know?

What did strike me as intersting was that many of the bigger media companies started to live stream on Facebook from Orlando. What happened here is that the NY Times reporter, working with an iPhone and Livestreaming to FB, simply found some local TV reporters doing their rather predictable local TV news thing, and shoved the iPhone into the scrum.

You have to ask yourself, 'what is the value in the New York Times simply doing what every other two bit local TV station does?'  If I wanted to watch this (which I probably don't) then I could just watch it on Channel 2 or 5 or 7 or 9 or 11...  You get the idea.  New Tech, old thinking.

All of which brings me to the question that Merle Braley sent me yesterday:

However, that leaves the question, how can a local freelance video journalist do better than "the worst of local TV" for breaking news? When I get an alert on my phone of a newsworthy incident there's often barely enough time to get there shoot and upload to meet the deadline.

So, here is my answer, as best I can:

If you are a freelance VJ and you want to cover news, as soon as you arrive at a story and see a traditional local news scrum, get in your car and drive away - or have a cup of coffee.

There is no point in trying to imitate what conventional local news does so badly.

What you can do, (and should do) IMHO, is to leverage off what the technology does best to try and push the envelope in what news and journalism could be.

For example, local TV news crews rely on the ubiquitous 'man on the street' (see above) because it is easy to do.  All you have to do is find someone, shove the camera in their face and you are done.

What you, as a VJ can do is to bring an element of both depth and intimacy to your reporting.  You can do the in-depth stuff. You can spend the time necessary to get a really compelling portrait of a person (as opposed to a few sound bites). You can 'live with' a person for a day or two if they are amenable.

Doubtless in a few weeks we will see such pieces turn up on 60 Minutes. They wil have spent a lot of time, effort and money to do waht you can do in a day or two on your own, and probably better - as it is just you and your subject - not a crew, a producer,  lighting, etc...

If you want to be in the news business, think of yourself as a Magnum photographer.  Take a look at the best work of people like W. Eugene Smith to see how they covered a story.  See his work on Minimata.

We have a chance here to re-invent a whole new kind of visual journalism.  It is nothing short of a tragedy, in my thinking, when such powerful tools of newsgathering and storyteling are used in such a pedestrian way.