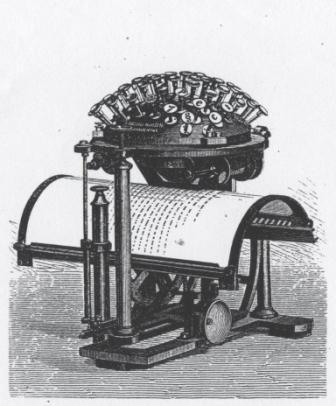 Nietzsche And The Typewriter and Virtual Reality

There is a great belief that we control our machines.  We build them to do certain tasks, and then we control them.

The opposite may be closer to the truth.  This is of particular concern as we begin to enter the era of Artificial Intelligence and Virtual Reality.

Last night, Lisa and I went to a meet up at the offices of Vimeo, in Manhattan.  I was a speaker, with the usual subject of 'how to make money in the video world', but the woman who preceeded me was from a new start up called SVRF, pronounced Surf.  The VR in the center is for Virtual Reality.

The videos she demonstarted were simplistic, but you can see that the quality and the content are going to get better, and probably fairly quickly.  The premise of VR is that it emmerses you into another world, largely created. At some point in the future, and I have no idea when, this is going to become fairly common.

We plunge headlong into technologies, almost always withouth contemplating for a moment the consequences.  What, I began to wonder, were the consequenes of a society that spent 8.5 hours a day plunged into the Virtual world?  This is not so dumb a question. We already spend 8.5 hours a day staring at flat screens.

The question made me thing of Freidrich Neitzsche and his typerwriter.

Toward the end of this life, Neitzsche began to go blind.  This was particularly difficut for him, for it impinged on his writing, which then was all done by hand with quill and ink.

In 1881, 9 years before his death and rapidly losing his sight, his sister suggested that he try writing on a typewriter. This was an entirely new kind of invention, a new technology - making words on paper by pushing keys instead of writing them.  Neitzshce ordered a Maling Hansen ball typewriter from Copenhagen. (See above).

It did not take Neitzsche long to master the typing part, and soon he was hammering out his works, but something strange came along as a byproduct of the tech.  His writing style changed.

This did not happen consciously, but instead of writing the long, flowing prose that the pen had given rise to, his work became more ascerbic, clipped, pointed and short tempered.  He described it as 'telegraphic'.

Neitzsche had not changed, but his writing had, enrtirely as a function of the technology that came between his ideas the paper.  We are warped by our technology, and our brains, plastic as they are, adapt our thinking to the DNA of the tech itself.

If the mechanical typewriter could so effect Neitzche's wriitng, what will VR to do our thinking and our perception of ourselves?