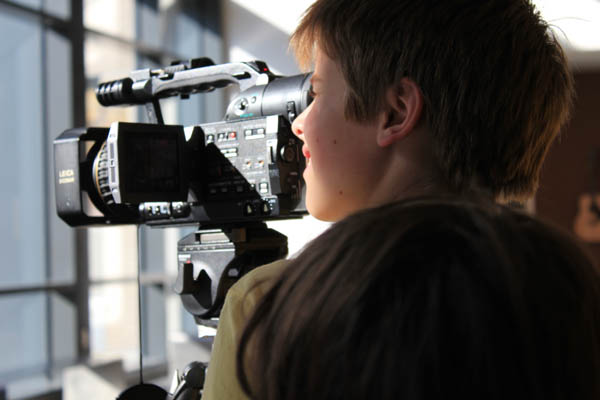 No Film School: Massive List of Summer 2016 Grants All Filmmakers Should Know About

Summer is kicking off and that means it's time to start your summer film projects.  Maybe it's a short you've been meaning to produce, or that documentary you've had in your head for months, but now is the time to get going.  If you need a little more motivation, NoFilmSchool.com has released a list of film grants that you can take advantage of during this summer.  Grants range far and wide arcross genre and style with something for everyone.

Honoring the memory of Derek Freese, this finishing fund is given biennially to an independent filmmaker and provides up to $35,000.

From the Derek Freese Film Foundation:

Derek Freese Documentary Fund (DFDF) provides production support for feature-length documentary films that have both a strong narrative and compelling story, across a broad spectrum of subject matters.

For both US and international filmmakers, POV is known as the best of American public television's showcase of independent documentaries, offering a highly competitive sum for broadcast distribution of films each season. From POV:

POV, public television's premier showcase for independent, nonfiction film, seeks programs from all perspectives to showcase in its annual PBS series. All subjects, aesthetic approaches and lengths are welcomed.

Growing each year, the organizers of Camden International Film Festival have expanded the Points North Fellowship for five lucky filmmakers to receive two All Access passes to the festival, four nights of accommodations, and a stipend to subsidize their travel to Camden for the Points North Pitch and industry mentorship to launch their doc project. From CIFF:

The Points North Fellowship is a unique opportunity for five documentary filmmakers (or filmmaking teams) to develop their feature-length works-in-progress through a combination of focused industry mentorship, workshops, meetings and a public pitch session at the Camden International Film Festival.

The Alter-Ciné Foundation offers $10,000 (Canadian) to filmmakers born and living in Africa, Asia or Latin America with a documentary project in your native language that fits in with the aims of the Foundation. From Alter-Ciné:

The Alter-Ciné Foundation is inspired by this ethics. The Foundation offers a yearly grant to young film and video makers from Africa, Asia and Latin America to direct a documentary film on the theme of rights and freedoms, including social and economic rights, women’s rights, the right to culture and artistic creation.

A core component of Sundance's Documentary Film Program, this competitive grant looks for artful films about relevant topics, and it can get you $20,000 - $50,000, depending on the application type (Development, Production/PostProduction, Audience Engagement). From the Sundance Institute:

The Sundance Documentary Fund provides grants to filmmakers worldwide for projects that display: artful film language, effective storytelling, originality and feasibility, contemporary cultural relevance, and potential to reach and connect with its intended audience. Preference is given to projects that convey clear story structure, higher stakes and contemporary relevance, forward going action or questions, demonstrated access to subjects, and quality use of film craft.

Teaming up with the Screening Room in 2016, this fund gives out up to $25,000 in funds and in-kind donations to films by women filmmakers, with a preference for plots about women. From WIF:

The Women In Film Finishing Fund supports films by and/or about women with cash grants and in-kind services. To qualify, the film must be at the rough cut stage at the time of submission.

Every year, NVTVF accepts 4 to 60-minute independently produced television pilots and web series from around the world for exposure, awards and development deals with Lionsgate, NatGeo, the Travel Channel, and Sundance Channel, to name a few. From NVTVF:

The Independent Pilot Competition (IPC) is the NYTVF’s flagship, annual competition, accepting independently-produced, original television pilots and web series from around the globe. Official Selections from the IPC will screen in competition during the annual New York Television Festival each fall. IPC Official Selections are eligible for the competition's category and individual achievement awards as well as guaranteed development deals from Festival Development Partners.

Coinciding with the BFI London Film Festival, the PFM selects projects to meet potential investors for films with a budget over €1 million and has a parallel MicroMarket for films with budgets under that amount. From Film London:

From encouraging new business relationships to attaching international sales companies and securing various forms of investments in companies and film projects, PFM is invaluable for producers and financiers alike. This year, the Micro Market strand for projects with budgets below €1m is fully integrated within PFM, making it more far-reaching than ever before

Twelve teams are shortlisted for the scheme, and receive intensive training at Film London's Microschool along with mentorship and development funding. From this shortlist, six projects are selected to go on to a second phase of development with further funding.

Finally, two features are commissioned and receive additional development, as well as production funding of £100,000 and distribution funding for finished films.

If you are a student or a low-budget indie, Panavision might supply you with free camera packages. From Panavision:

This year-long program sanctioned by the WGA has launched the careers of writers from Maria Jacquemetton (Mad Men) to George Mastras (Breaking Bad). From Disney | ABC:

Writers become employees of Disney | ABC Television Group and will be paid a weekly salary of $961.54 ($50,000.00 annualized) plus any applicable benefits for which they are eligible in accordance with the then-current Company benefits plans. The program is designed to expose writers to key executives, producers and literary representatives – all essential in the development of a writing career.

For the first time in 2016, NVTVF has added a script competition for original, half-hour comedy series scripts looking for broadcast, cable, and digital platform buyers. From NVTVF:

Want to get your script in front of decision-makers across the television and digital landscape, culminating in a week-long Festival that provides a crash course in the TV Industry? Submit to NYTVF Scripts and join the indie television movement.

If you are a UK-based writer with a focus on content for chidlren, you could be one of three projects selected for a BAFTA showcase and industry introductions for this particular call. From Rocliffe:

Shortlisted writers will go on to be involved in a wide range of development opportunities including workshops and events. BAFTA & Rocliffe are looking for new talent that demonstrate industry potential. As part of the partnership with The London Book Fair, a writer from one of the three projects will be taken to MIP Junior in Cannes in October 2015 with all travel and hotel expenses paid. The recipient of this prize will be selected by London Book Fair.

See the full list of grants and competitions here.