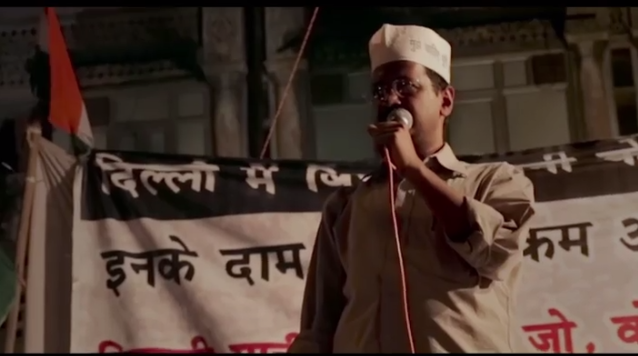 Still from An Insignificant Man

Political Documentary Banned by the Indian Government Gets US Release

A documentary about Indian politics, "An Insignificant Man," directed by Vinay Shukla and Khushboo Ranka was banned in India, but Vice is giving it life in the United States and the Internet.

According to an interview with Vice, making this documentary was a very difficult process. They decided to do a film on Indian politics because that was the hot topic of the time as the country was wrapped up in a establishment shattering election. The filmmakers say that Indian politics is not a topic usually covered in film -- or even that much at all. They say it's opaque, secretive, and nearly impossible to infiltrate. That is why they were so surprised when they were given amazing access to the AAP, a new political party in the country.

Despite this access, once the film was completed, the government and powers that be tried to squash the film and ban its release.

The film was effectively banned because we were asked a few impossible things. We were asked to get permission from the Prime Minister, which is literally like saying you need to get Trump’s permission to show the film in America. So we fought against it at the level of the Judicial. After that, we did a limited release. In the first week, we released the film in about 25 theatres, and in the second week, we expanded to 64 theatres. It performed beyond expectations in the first week.

This story is not only one of the amazing perseverance of committed filmmakers, but also one of the power of the medium. Video is an incredibly powerful way to make a statement. Not only does it allow for you to show a story rather than just tell a story it has a very intimate feel to it. Similarly, because the audience can see for themselves what is happening on the screen (rather than just reading a report) it can have much more validity for audiences. Additionally, video has become such an engraned part of our global culture that it reaches a vast amount of people, especially with the Internet. All of this may explain why the Indian government, not wanting to attract attention and keep its inner-workings secretive, tried to have the film banned. If it were just an article in a newspaper would they have had the same reaction? We think now, as do the filmmakers.

If you have a story to tell, video is the way to do it. It is not only the most intimate storytelling form, but also it is the most pervasive in our culture.