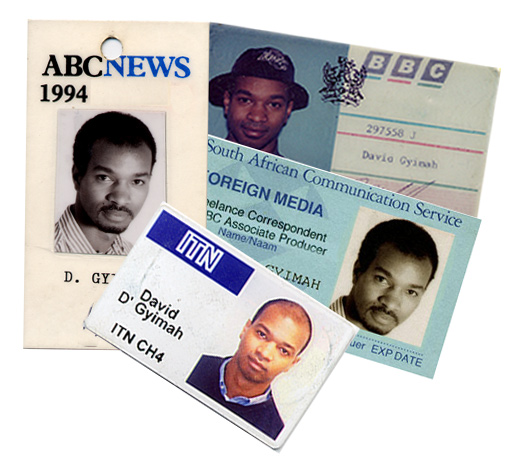 He has done it all

In 1993 we were hired by Associated Newspapers in England to build a 'NY1' for London.

We were presented with 42 young and smart journalists we were going to turn into VJs.

It was one of the best groups we ever trained and many of them have gone on to some very successful careers in British journalism. One is even an MP!

In those days, the whole idea of Video Journalism was still extremely experimental, so you have to give the group credit for embracing what was still largely an 'unknown' way of working. No one, I think, embraced it more deeply than David Dunkley Giymah.

Today, it is DR. David Dunkley Giymah, and I think he is probably the only doctor of videojournalism in the world.

Dr. Giymah (it still seems strange to me to call him that), has been a working VJ all over the world since Channel One. But he has also been a researcher and an academic and has pushed the boundaries of what video storytelling could be.

David was one of the UK's first NUJ recognised videojournalists in 1994, and his work has garnered various international awards such as the Knight-Batten Award, International Videojournalism Awards from Berlin, and finalist for Channel 4's Innovative media awards.

Born in the UK, he attended secondary school in Ghana in a community vibrant with Indian, Chinese and Lebanese cultures, before returning to the UK, and then living and working (freelancing for the BBC World Service and domestic TV) in South Africa during the tail end of Apartheid.

Apple has called him "a hurricane and professional rule breaker".

You can read much more about him here, in his Viewmagazine.

I would also urge any aspiring videojournalists to get in touch with him directly. Tell him I sent you.