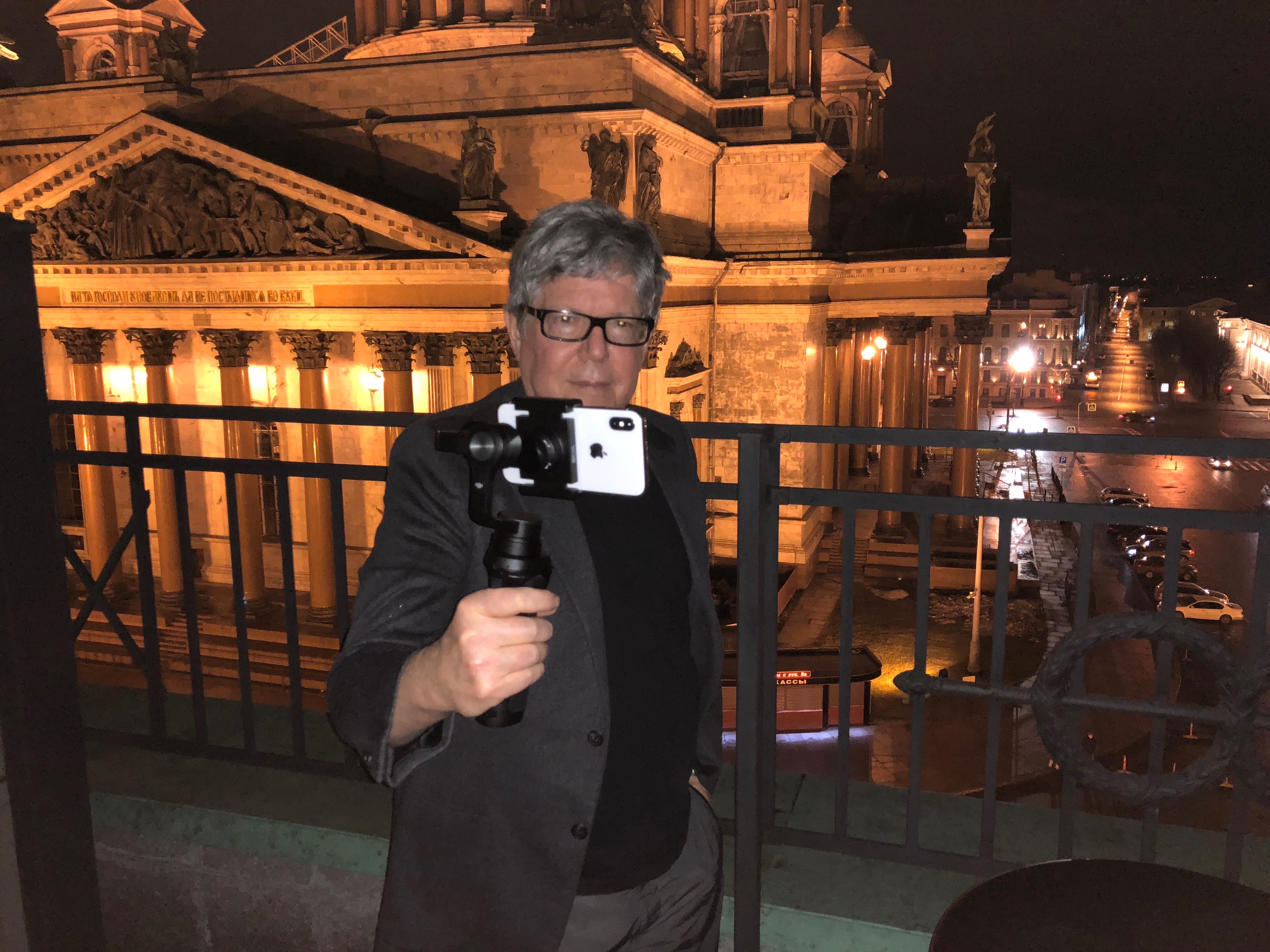 Playing with my OSMO and iPhone in front of St Isaac's Cathedral, Russia

When you think of places to visit for New Years, St, Petersburg in Russia does not immediate leap to mind.  St Petersburg in Florida, maybe. But we went to Russia instead.

I cannot say why we decided to go, specifically, other than, like Everest, it was there. Also, like Everest, it was cold, and as it was the dead of winter, dark.  The famous White Nights take place in the summer, when the daylight hours run from 4 am to, well, 4 am, as the sun never really sets.  In the winter, the sun comes up at around 11 and is gone by 3.  You have to move fast.

St Petersburg, the former Leningrad which was the former St Petersburg, was built from nothing, on a swamp at the conjunction of the Neva River and the Baltic by Peter The Great in 1703. It was built by Swedish prisoners of war, and you can see the Swedish influence. It looks just like Stockholm -- from the architecture to the canals.

St Petersburg was the capital of Russia until 1917, when Lenin, arriving at the Finland Station in St Petersburg, set off the Bolshevik Revolution, launched the Soviet Union and temporarily moved the capital from liberal St Petersburg to conservative Moscow.  It never came back.

In 1924, on the death of Lenin, the name of the city was changed to Leningrad, which it remained until the collapse of the Soviet Union in 1989.

There is much to say about St Petersburg/Leningrad - far too much to say here. In preparation for the trip, I read Harrision Salsbury's 900 Days - The Siege of Leningrad.

In 1941, as the German army invaded the Soviet Union, the Germans laid siege to the city. It was their intention to starve it to death as opposed to invade it, and so they cut it off from the rest of the Soviet Union and the rest of the world, and for three long and very cold years, the inhabitants of Leningrad did just that - they starved, but they never surrendered.

Nearly one-third of the population of the city died of starvation, or froze to death during the 3 year siege.  They were reduced to eating cats and dogs, then rats, and when the rats ran out, they ate the wallpaper paste in their homes.  It was so cold, as they ran out of coal, that they simply left the dead bodies of their friendly and family in the unheated rooms of their own homes.  An estimated 1.2 million people died of starvation, but they did not surrender.  The Russians are really, really tough.  Really tough in a way in which I think we in the West simply cannot begin to imagine.

The most interesting part of being in St Petersburg, (and there was much to hold one's interest) was that everything is written in Cyrillic Text. If you go to Paris or Berlin, you can still read the signs, even if you don't speak German or Russian, but in Russia you have to learn an entirely new language just to read the street signs, let alone the menus.

It was a challenge, and after a while, a lot of fun. Somewhat like some 5-year old just learning the alphabet, I took a great deal of pleasure to read street signs, store signs, newspapers headlines and soon pretty much everything - I think to the general annoyance of the people I was with.

The Cyrillic Alphabet only began to appear in Russia around the 9th and 10th Centuries.  It made me wonder why it was so late in getting a written language, but then, before the invention of the printing press, what was the point in even being literate as there were no books, no newspapers, no nothing to read.  So no one did.

A great deal of Europe was in fact, totally illiterate pre-printing press and it did not effect their lives much.

Just as today, a great many people are still video illiterate - so long as they can watch. But just as the printing press transformed the Medieval world, so too will the video revolution and video literacy transform our own.