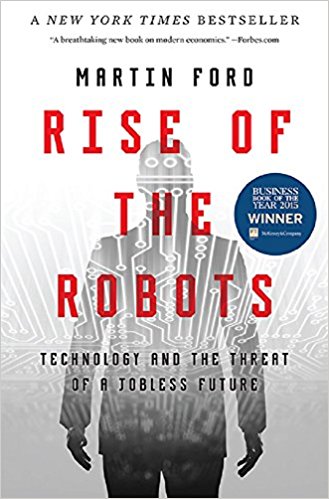 Get ready for a big big change...

Rise of the Robots

I am reading Rise of the Robots: Technology and the Threat of a Jobless Future, by Martin Ford.

It is a deeply disturbing peek into what the future is probably going to look like.

Probably, because there are immutable trends that have been in process for the past 40 years and are unlikely to change.  Looking forward, one can see that the nature of work and the nature of the world are going to undergo the kind of fundamental shift that we have not seen since the Industrrial Revolution, but one that promises to be far more disruptive.

It is all driven by the digital revolution, coming concurrently with the Internet, which changes pretty much everything.

We are used to the idea of robotics taking the place of industrial and factory workers, but we have yet to wrap our heads around the idea that the AI revolution is going to obviate 'professional' jobs - lawyers, doctors, investment bankers, a lot faster than it is going to wipe out blue collar jobs. (Or maybe just as fast).

We are facing a future in which almost no one will work.  A society in which perhaps 1% runs the world and the economy and the rest of us are, effectively, cut out of what will be a far more effiicienty run world.

It will be different.

100 years ago, or so, 85% of the popiulation of the US was involved in agriculture. Today, it is 3%, and food is far less expensively grown and far more diverse.  The former farm workers went into other professions. But in the Digital Revolution, there won't be any professions for them to go into.  That is a problem.

The evidence for this is all around us already.  Self-driving cars may be in the near future, but the Digital Revolution is already here now.

"In 2011, The Washington Post's Michael Rosenwald reported that a colossal, billion-dollar data center built by Apple in the town of Maiden, North Carolina, had created only fifty full-time positions. Disappointed residents could not comprehend how expensive facilities, stretching for hundreds of acres, could create so few jobs."

The reason, of course, was that the entire Apple facility was robot run.

What does this mean for us, as content creators?

Not to be overly cynical, but in a world in which 95% of the population is effectively unemployed, entertainment and video are going to be booming businesses, dwarfing what we see today.

Vast volumes of material are going to be constantly consumed in a world flooded with screens and free time.

And who is going to make all that content?

(Who wrote the novels of the 19th and 20th Centuries?  People sitting at home with pen and paper or typewriters).

Ray Kurzweil, in a PBS series produced in 2012 was asked about the digital future.  He took out his smart phone and held it up:

"Anybody with a smart phone is carrying around billions of dollars of capability circa 20 or 30 years ago."

What used to take a 'team' or even a network to produce and a broadcasting tower or an FCC license or a billion dollars' worth of cable capcity to distribute can now be done entirely from your smart phone.

It is unlikely, I think, that AI is going to obviate the creative process, at least for the forseeable future.  What is going to change is the process whereby content is made.

That process is going to be shattered by tech.

You can shoot, script, edit, track, add music, graphics and broadcast from your smart phone.

You can kill the costs that a network brings with it.

All you need is an idea.

And then, of course, to do it.