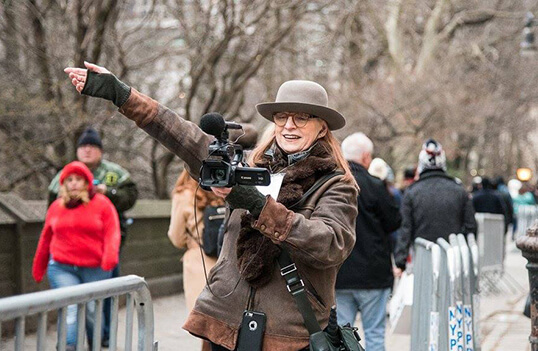 About 10 years ago, Lisa and I gave a lecture at the Center for Communications entirled How To Start Your Own TV Channel.

There were a couple of hundred people in the audience, and when we were done, a few of them came up to talk to us.

One of them was an incredilby dynamic woman with red hair who had more energy than a tornado.

Her name was Sandi Bachom and she was one of the first true Citizen Journalists.

On her own, as a freelancer, she has covered some of the most important stories today.

She is utterly fearless.

She emails me and tells me also that she first picked up the video craft with CurrentTV, my child. such a small world.

Here is a video that she posted yesterday on Facebook.

And here is her official bio.

Beginning her career in the "Mad Men" days, Sandi Bachom has produced thousands of award winning television commercials for every major ad agency for over three decades. Author of three best-selling books “Denial Is Not A River In Egypt,” (20 years in print) “The Wrath of Grapes,” and “Hell in the Hallway” published by Hazelden/Betty Ford. Now a video journalist and filmmaker with NYPD Press Credentials, and Getty Images Contributor, cinematographer and editor of thousands of films with millions of YouTube views and a lecturer on new and social media. An original VC2 Producer for Al Gore’s Current TV. 'Shadow Boxer' winner Best Short 2012 Shadow Box Film Festival, 'A Tale of Two Sandy's' given special My Hero Award in My Hero Film Festival, her '#MyOccupy' invited by Michael Moore to screen at his 2012 Traverse City Film Festival. She has been a guest on MSNBC, ABC, CNN, Fox, HuffPost Live and her videos have appeared in every major news outlet. Creator 'Manny's Virtual Wall'. Films in Progress: Trumped: Frontlines of The Resistance A Tale of Two Sandy's: The Storm After The Storm The Last Eyewitness Project Six Degrees of Sandi Bachom: Meeting my 5,000 FB friends http://sandibachom.com

And here's a great piece about her.

Well worth the read

You can get in touch with Sandi direclty @sandibachom