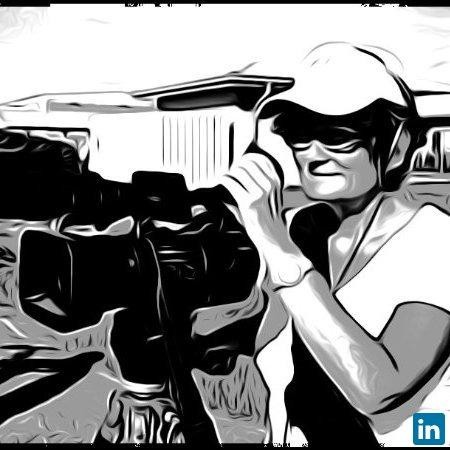 In 1988, when I was working my last year at CBS Sunday Morning, before leaving to experiment with the idea of Video Journalists, I produced a story about homelessness with a young photo journalist named Stephenie Hollyman.

He had just published her first book, We The Homeless. It was a photographic study of homelessness in America, then a relatively new subject.

Stephenie and I went to Tulsa, Oklahoma and did a TV story about her and one of her homeless subjects.

Shortly after that, I left CBS, bought a video camera and went to Gaza to see if I could make TV news stories on my own, without crew, producer, etc..

I gravitated toward great photojournalists to take them into video.  PF Bentley, White House photographer for Time Magazine, David Kennerly, Dirck Halstead and Bill Gentile from Newsweek were in the first group.

So was Stephenie Hollyman.

Today, some 32 years later, she is still at it.

She also reports, writes and films stories for television as a solo "backpack" video-journalist. Her clients have included  CNN, CBS, Nightline, and others. During the Deepwater Horizon oil spill in the Gulf, she reported with video from the field, which she uploaded to a blog and Getty Images. She has also reported as video-journalist for NYTimes TV ( then VNI )  as part of a team that won a National Documentary Emmy Award-winning for "Killer Virus." Hollyman has also worked on assignments as a producer for CNN and CBS TeleNoticias in Latin and Central America. Hollyman produces photography and original multimedia content that exploits convergence. The stories include streaming video, audio, interactivity, and photography. Clients have included MSNBC on the Web, CNN, ABC Nightline, the WashingtonPost.com and others.

Today, she lives on a boat but is in the process of moving to France, once this virus hting is over.

As a result, she often does a lot of videos for boating magazines.

Here's one I liked