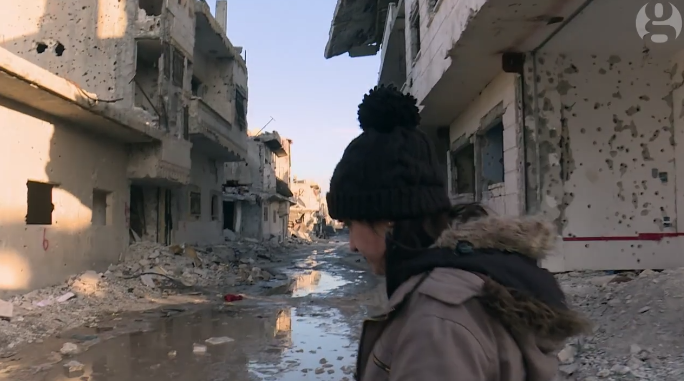 We talk a lot about the power of technology and video here at TheVJ.com. We believe that small cameras (even smartphones) in the right hands can create powerful stories that you couldn't do before in the era of big cameras and TV news crew.

You can see examples of this all over the Internet. People creating travel videos of their trips, uplifting stories from small communities, and much more. Viewers on the web have a wealth of stories that otherwise would go unknown like these -- powerful stories from places around the world.

The Guardian has produced a video like this from Rania Mustafa Ali, 20, a Syrian refugee who filmed her journey from Kobane to Austria. The footage was compiled and edited by a team of filmmakers in Europe to tell Rania's story, and shed light on an issue that rarely is given so much attention on traditional platforms. The story of refugees you see on the news is usually focused on statistics and soundbites -- rarely do you get to see the point of view of a single character. Even when you do it's usually very superficial and cut down so it can fit into an evening broadcast.

This case is starkly different. Rania didn't have to wait for a camera crew to find her and tell her they wanted to tell her story, she took the tools into her own hands and began to tell her story herself. Additionally the story didn't have to be cut down to fit into a 30 minute news broadcast, but rather can be a full 20-minute story in and of itself online.

This is one of the most powerful aspects of Internet video is that the constraints of traditional TV broadcasts are completely lifted and there is space to tell a full story in an in-depth way. This makes the story far more focused and comprehensive. Additionally, because of the equipment used (a small camera and smartphones) the story itself can be deeply personal. When you go into any situation with a large camera and a crew you instantly are unable to capture the true essence of a place of situation -- people are put off by the large equipment. In our current video culture, people have become conditioned to small cameras and smartphones that entering any situation with that kind of equipment does not put people off or make them act too differently. It also gives the ability of the person creating the video to have far more creative and personal control -- it is just them and a camera and there are less intermediaries for the story to pass through to lose its personal viewpoint.

There is exciting work like this being done in video around the world, and more and more these stories are driving conversations on social platforms and proving that video is the true lingua franca of the Internet, and we should expect to see more work like this (for big stories and small) on our newsfeeds.