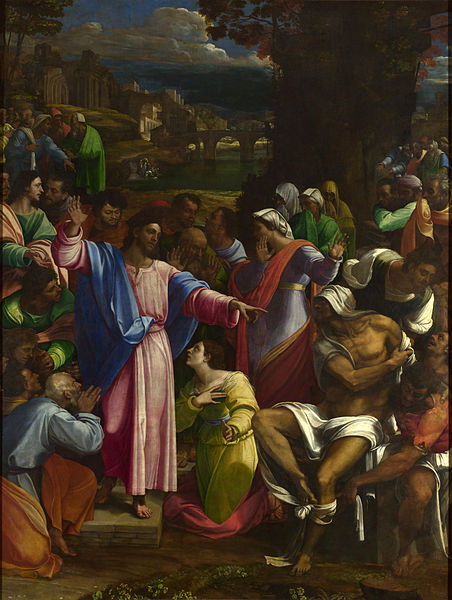 Television in the 16th Century

LONDON:  This afternoon we went to The National Gallery here in London to check out the Michaelangelo & Sebatiano exhibition.

Michaelangelo, we have all heard of, even if you did not take Art 101.  Sebastiano, I had never heard of, but he was a contemporary of Michaelangelo's, and the two actualy worked together for some time.

In order to learn something(!), we got the headsets and the recorded tour, which was quite good, and we learned a lot.  While on the tour, however, I had something of a moment of epiphany while staring at the paintings.

We live in an era absolutely awash in visual images.  Between television, movies, magazines, newspapers, the sides of busses, video in elevators (or lifts as we call them here), and of course, the Internet, we probably see more visual images in 3 minutes than the average person living in the 16th Century (the time of Michaelangelo) saw in a lifetime.

So when we walk the floor of the National Gallery, I think it is important to put ourselves back in the mindset of someone at the time of Michaelanglo when we look at these works of art.  All too often, I think, we just blow by them... nice!...and move on.

These were done at a time when, of course, there were no movies, no television (clearly), but also no magazines or newspapers or pretty much anything else.  The term Mass Media, if it was used at all, applied only to the ritual wine and wafer.

So, taking the time to really stare and, and get into, one of these paintings, and trying to see the from an early 16th Century perspective, you start to see them in a very different way.

Above, I have printed one of the paintings in the exhibition that really caught my attention - The Raising of  Lazarus by Sebastiano del Piombo.

This was painted by Sebastiano in 1517, and, obviously, portrays the story of Christ bringing the dead Lazarus back to life.  Take a minute and really look at this.  Do you see the look of shock or horror on the faces of the other people who are witnessing this?  Some are debating what has happend, while others hold their noses at the stench from the tomb.  Lazarus' sister Mary, in yellow, kneels and his other sister, Martha, actually recoilsin horror. This is not just a religious painting, this is (not to be too flip) a zombie movie... from the 16th Century.

This was mass entertaiment.  This was the equivalent of The Walking Dead, and it was designed for both mass entertaiment and mass education (as most people could not read). But they all knew the story... and now, they could see the movie... or as close as you could get to the movie version, at least in 1517.

This is visual story-telling.

This is, ironically, exactly the kind of thing we were trying to inculcate in the participants in our BFBS iPhone Video Bootcamp earlier this week.  You have to tell a story to get and hold people's attention.

This is visual story telling, in its own way, no different from what you can do with video and an iPhone... sort of.

Of course, you don't always get the Son of God raising the dead while you are fumbling around with your smart phone (a good reason to know how to kick on the camera wth a quick left swipe so as not to miss the action); but no matter what you are reporting, the elements of story telling remain the same... from the time of Michaelangelo to now.