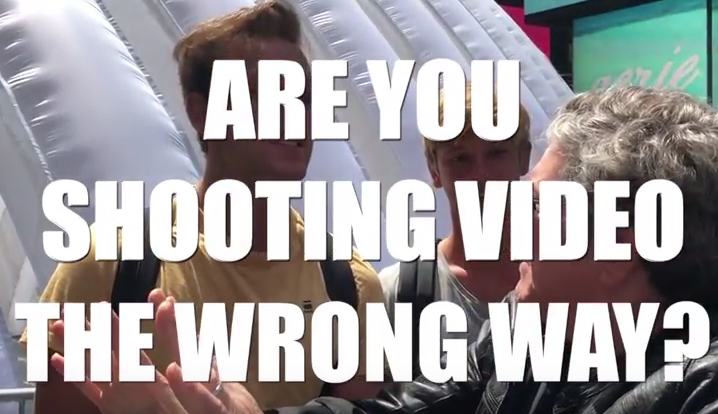 The #1 Mistake You’re Making With Your Videos

The opportunities to make a living with your video camera or smartphone are limitless so why do so many people struggle to sell their work?

The answer often lies in their inability to film great footage. Today because everyone has smartphones, everyone thinks they can shoot video. In fact, most of the video that’s created lacks the professional quality needed to be able to sell it. This is a simple problem to fix but requires training. Michael Rosenblum invented his 5 Shot Method™ as a way to help you create professional quality footage that can easily be edited and can help you sell the work you produce. A few days ago, Michael went to Times Square in New York to prove the point.

We've all seen people shooting bad video before. Whether it's on the street, at an event, or at a party, people everywhere are shooting video, but most of them have no idea how to do it.

Here are some simple tips to remember when you are shooting video:

This is one that a lot of people have a lot of strong opinions on. The reality is that a lot of people are taking vertical videos, and they can work. For example, The Washington Post does a good job producing vertical videos. In most cases though, especially if you are trying to sell your work to online outlets or even produce a TV series, you have to shoot horizontally. It is still the dominant orientation for video. On a personal editorial note, it is the way we see the world.

The best way to shoot your video and the best way to ensure that it can be easily edited is to shoot in 5 shot sequences. It works for almost every kind of action that you could be shooting and will make your footage look great, and make it much easier to edit. Learn all about the 5 Shot Method in our shooting course.

Close-ups are very important. Arguably the most important shot of the 5 Shot Method, and when you shoot your close-ups make sure you are very close. When you think you are close, force yourself to get close. Make those images jump off the screen. Don't worry about getting in the way, just get the shot. Put the camera as close to the action as you can.