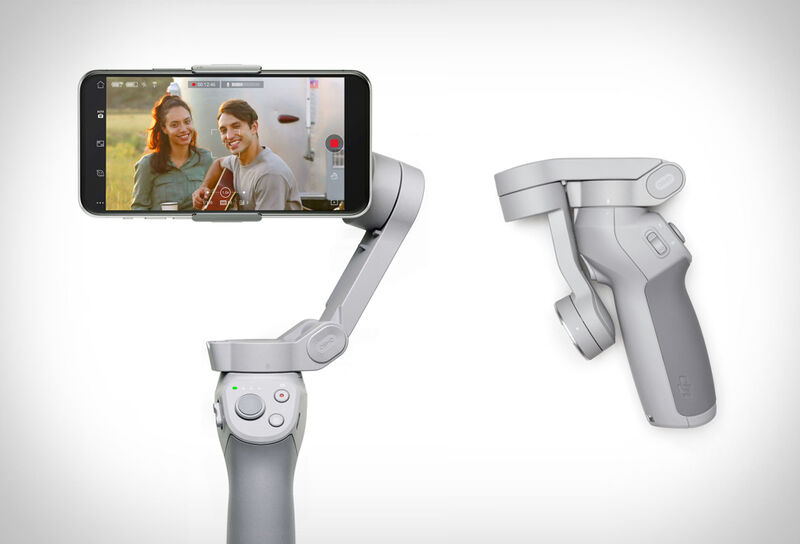 DJI, the Chinese tech company best known for its smartphone video accessories has released its newest smartphone gimbal: The Osmo Mobile 4. The new model has some great improvements from the last model and some brand new features that will help make your video looks smoother and more professional.

If you missed the last three versions, the DJI Osmo Mobile is a smartphone gimbal that stabilizes your phone as you shoot. This is useful if you're doing moving shots, or even if you just have very shaky hands and need some stabilization. Smartphone companies have been adding stabilization features into their devices but stabilizing while shooting can be much better than internal software stabilization. Additionally, DJI has added features to make the Osmo do much more than simple stabilization.

First, let's look at some of the hardware changes on the Osmo Mobile 4. The first major change is the new magnetic clamp system. Previous models used a simple clamp system to attach your device to the gimbal, but this could make getting your phone on or off the gimbal a much quicker process -- which can come in handy during a shoot.

The new system utilizes a magnet mount on the gimbal itself and then two different magnetic mounts for your device. Either a clamp with a magnet on its back that would mimic the previous design just without the clamp attached to the gimbal itself, as well as a simple magnet ring that works with the iPhone 12's magnetic back. Just attach the ring magnet to the device's back, and then snap it onto the magnet on the Osmo.

Another hardware addition is the tripod bottom. This was a feature that was available on the combo version of the Osmo Mobile 3 but now is standard on the 4. Now, the bottom of the gimbal has three legs that can come out to turn the gimbal into a tripod.

Let's take a look at some of the software updates that come with the Osmo Mobile 4. In order to use these features, you'll have to be recording in the DJI app, but you can easily switch between apps depending on what you are shooting. You can start in the native camera app, switch over to another shooting app like Filmic Pro, and then switch into DJI's app to use some of these features, all without having to reconnect the device. So let's take a look at some of these new features.

First, is an improved Active Track. This feature allows you to highlight a person (or animal) and Osmo will automatically track that person keeping them in the frame and keeping focus and exposure set for that person. Another software feature is DynamicZoom. This gives you that "Hitchcock" effect of the camera tracking while zooming to give you that Hollywood feel. Additionally, the Osmo 4 has 3 different timelapse modes to help you shoot polished timelapses. They include Hyperlapse for condensing time and motion for a sleep look, Motionlapse for creating timelapses with a simple pan, and a standard Timelapse mode for static timelapses. DJI is also rolling out an editing app, The DJI Mimo app, that we'll look into more in a later article.

If you are a person who likes shooting with a gimbal this is the one for you. Packed with new features and very easy to use, the Osmo Mobile 4 is a great way to give your videos a little Hollywood feel for not that much in price.