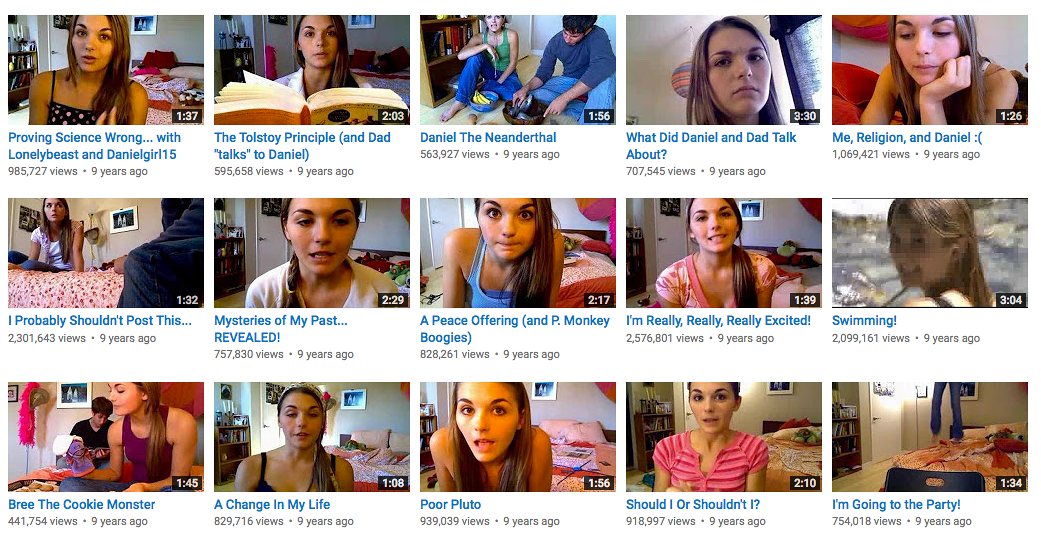 The Guardian: How one mysterious vlogger, Lonelygirl15, changed the internet

Last year YouTube celebrated its 10 year anniversary.  In 2005 YouTube was no more than an idea and a small website with a few videos on it.  Within a few years YouTube became a cultural sensation -- drawing millions of views and uploads every hour.  Despite its popularity, YouTube was seen in a different league than its predecessor television.  It wasn't a place for high-quality content, it wasn't a place to make money, it was just a website afterall.  It turns out that those people weere wrong and YouTube has played a pivotal role in video's migration to the web during its 10 year life.  This success can be traced back to a few videos from those early years, but one case that is particularly striking is that of Lonelygirl15.

Lonelygirl15 was a vlogger who seemed to be just your average American teenager.  She didn't fit in with her family, complained about her social life, and took to YouTube to share her strife with the world in a relatable, humorous way.  There was only one problem: Lonelygirl15 wasn't really a 16 year old girl spontaneously turning to her webcam, but rather the videos were scripted, performed by actors, and in many ways was the first webseries.

Elena Cresci of The Guardian takes us through the story of Lonelygirl15 and other early YouTubers to show how the media bigwigs who wrote off YouTube from the start were dead wrong, and still don't get how video on the web has disrupted the way we produce and consume video content.

In June 2006, a 16-year-old girl began a video blog on YouTube. Her name was Bree, she’d been lurking in the burgeoning community for a while. She was a self-described dork, she thought her hometown was really boring – “Maybe that’s why I spend so much time on my computer …”

She was funny, friendly, had great eyebrows. Her first few videos were relatable and cute, introducing her friend Daniel and complaining about being home-schooled and having to do homework in June. It soon became clear she was pretty lonely, which was probably why her username was Lonelygirl15.

Bree was one of a slowly-growing community on YouTube of confessional video bloggers. They poured their lives into their webcams, not yet an automatic feature on laptops as they are today. Their follower bases grew slowly but steadily, with regular, and often grainy, videos about their day-to-day lives. They were largely ignored by the mainstream media, who at the time dismissed YouTube as just a repository for cat videos.

Lonelygirl15 changed all that. Her followers quickly ballooned and she became one of the young site’s most popular stars. The New York Times had a recurring blog about her. She had her own forum. Hundreds of people wanted to be her friend on Myspace.

The thing is, Bree wasn’t real. Lonelygirl15 actually had a small team of writers. Bree and her best friend Daniel were played by actors.

YouTubers and the media had been duped. Yet this was no mere flash in the pan hoax – this was YouTube’s first web series. This was the first time someone proved you could actually make money on YouTube.

And that changed everything.

Remember Lonely Island’s “Lazy Sunday” video? It was the one where Andy Samberg and Chris Parnell rapped about a Sunday getting cupcakes and going to the movies. Miles Beckett does. Because that’s the video that began his obsession with YouTube.