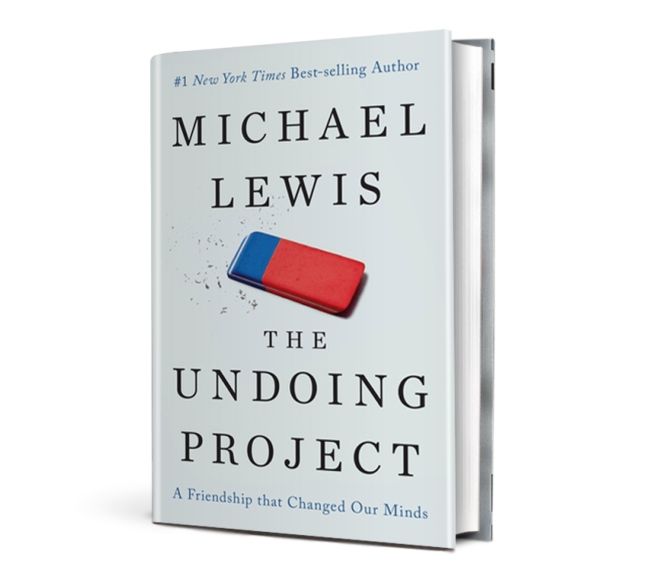 The Undoing Project by Michael Lewis

The Importance of Telling a Good Story

I am in the middle of reading The Undoing Project by Michael Lewis.

Lewis has been all over TV for the past few weeks talking about this book, but in case you have not seen him, it is a fascinating analysis of how we make decisions, done through a profile of two Israeli psychologists, Amos Tversky and Danny Kahneman.

You might not think that that is the basis for a very compelling book, but bear in mind that Lewis is the author of such killers (and later movies) as The Big Short, Moneyball, The Blind Side, Flash Boys and Liar's Poker.

In the case of Kahneman and Tversky (who would go on to win the Nobel Prize in Economics - pretty good for psychologists), it's all about how we make decisions and why they are often flawed.

I will leave it to you to read the book, but a few things struck me (I am not even done yet), which I think have a particulary application to our own field of video and I wanted to share them with you.

People's decision making is great effected by the environment in which they make those decision.  Tversky notes that people in total darkness are extremely sensitive to the first glimmer of light; people in total silence are alive to the faintest sounds.

The same holds true for our own world of video.

In the early days of televison and video, there just was not that much of it around.  Television was incredibly complex and expensive to make and to transmit. The world, more or less, had been living in a kind of darkness and the few glimmers of broadcasting (a few channels) made an enormous impression on people, largely because they were hearing the first sounds in a world that had until then been silent; the first light in a world that had, until then, been dark.

Now, we are inundated with video all the time.  There are literally millions of channels, so the incremental value or impact of each additional bit of video is far far less than it might have been only a few years ago, even if the video is exatly the same in terms of quality and content.

This has implications for us, because what is the point of taking the time and effort to create a video if it doesn't have an impact on the viewer?

This brought me to the second observation by Tversky and Kahneman (there are thousands in the book once you start to read it):  Kahneman notes: "no one ever made a decision because of a number. They need a story".

In the book, Kahneman is grappling with a statistical analysis of the probability of an Arab attack on Israel, done for their Department of Defense.  He notes that the military and political chiefs don't resonate to numbers or statistics. they resonate to stories.  People are the same.

This is important because particuarly in the world of journalism, we are constantly trying to communicate information and often data.  It apparently has little impact on the viewer, no matter how water-tight it is.  What does have an impact, apparently, is a story that people can relate to. Particualry if they can attach it to their own experiences.

Thus, if you are crafting a video, perhaps the most important aspect of that video, if you want it to resonate with your viewer, is the story telling aspect.  Tell a great story and the rest will follow.

But simply roll out a litany of facts and information and you may as well stop before you get started.