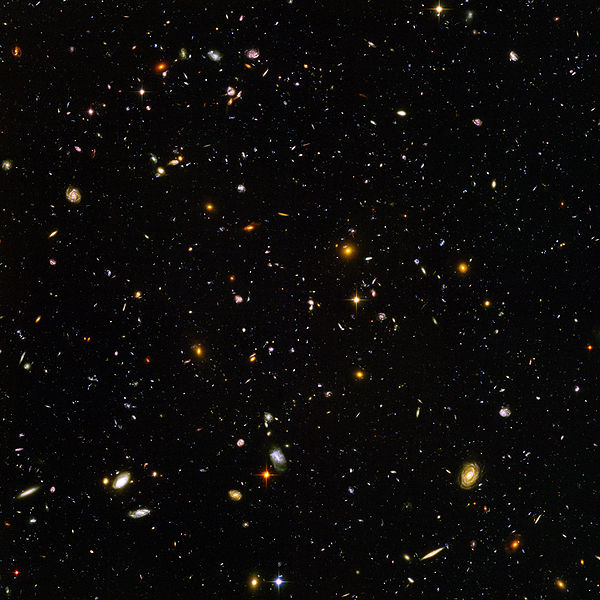 The Problem of An Infinite Universe...and TV...

Not so long ago, and for that matter, for most of human history, we believed that we were alone.  Alone in the universe, such as it was.

Until Copernicus in 1519 put the sun at the center of the solar system, we were all pretty much convinced that the earth was the center of everything.  Even after Copernicus, it would take a few hundred years for the whole idea of helio-centric to take hold.

It was not until 1920 that scientists even accepted the idea that there might be other galaxies besides our own.  Until than, the diffuse cloud patches in the sky were thought to be just that.

Today, thanks to Hubble (see image above), there are about 10,000 galaxies, at least that we know of, and each galaxy contains, apparently, between 100-300 billion stars.  That takes us a very long distance from the sole earth theory.

And, of course, if history is any guide, this is hardly the end.

The notion of infinity has always been hard for us to grasp. We are much more used to (and comfortable with) the idea of a finite space.

As video and television (and indeed all information, but for purposes of this essay, let's stick with video and TV), moves online, it goes from a very finite world of channels and networks to the infinite world of the Internet and online.

This is a VERY hard concept for TV networks and producers to wrap their heads around - this notion of infinite space.

They have all grown up in a world of very finite space, and that is how they naturally think.

But the digital revolution has given birth to infinity, in all things. And this too, has happened really over night.

Today, you can buy a terabyte drive at Walmart for $52.

We have very quickly gone from a very finite world online to, if not an infinite one, then one certainly approaching infinity very quickly. And the online world is expanding a lot faster than the universe.

The result of this is a kind of Copernican Revolution in cyberspace.  For a million years (or more) we have all lived in a world of definable and limited 'space'.  Wars have been fought over this (the German need for lebensraum).

But the Internet is, indeed, infinite - and for next to no cost (soon to be no cost).

The vast majority of our television and content is still produced by the major media companies (I don't believe this monopoly will long last), but for the moment, that is where we are. These are companies that have grown up in a world of extreme limits:

-There are only so many hours in a day, and we can only broadcast so many shows in a day, or a week.  And then there is Prime Time.  And we only have a few few slots in Prime Time and that is where we make our money.

-It is very complex and expensive to create and produce TV shows.

These two parameters, which dictate almost all their decision- making, are products of a 'truth' that no longer exists.

There are no limits to the amount of programming you can offer online. It is infinite. But networks and media companies still act and think as though it is.  Go to their websites - what do you see? Reruns of their old shows, available for re-viewing.  And that content was, by definition, limited by shelf space and time. So their use of online is inherently crippled before they get started.

Second,it is very inexpensive to create content.  Anyone can do it with an iPhone.  And cyberspace is limitless.

You see how these to work together. And you see how networks don't get it at all.

They should, if they were smart, open the doors to anyone who wants to make anything and allow them to put it on their websites. And open platform for television content.  Some will be great, some will be crap.  Who cares?

They are very concerned with protecting their brand.

How much stuff is for sale on eBay? How much of it is great? How much of it is crap? If there is crap on eBay does it wreck the brand of eBay? Hardly. People just move on to the next thing they like.  In fact, the more stuff that is on eBay , from cars to pieces of toast with Jesus' face, the more people go to eBay.

Online networks should be the same way.

In fact, the conventional networks, as they move to online, should reverse their standard equations - EVERYTHING online first - then the best and most popular goes on air.

Instead, they kill before it can be born almost all ideas they are presented with. (And trust me, I have been pitching ideas to networks for 30 years).

They just don't get an infinite universe.

But then, neither did The Vatican.

at least, not 1992, when, 350 years after the fact, Pope John Paul II acknowledged that the Church had made a mistake in condemning Galileo's heliocentric writings.

The networks, not having God on their side, don't have as long.