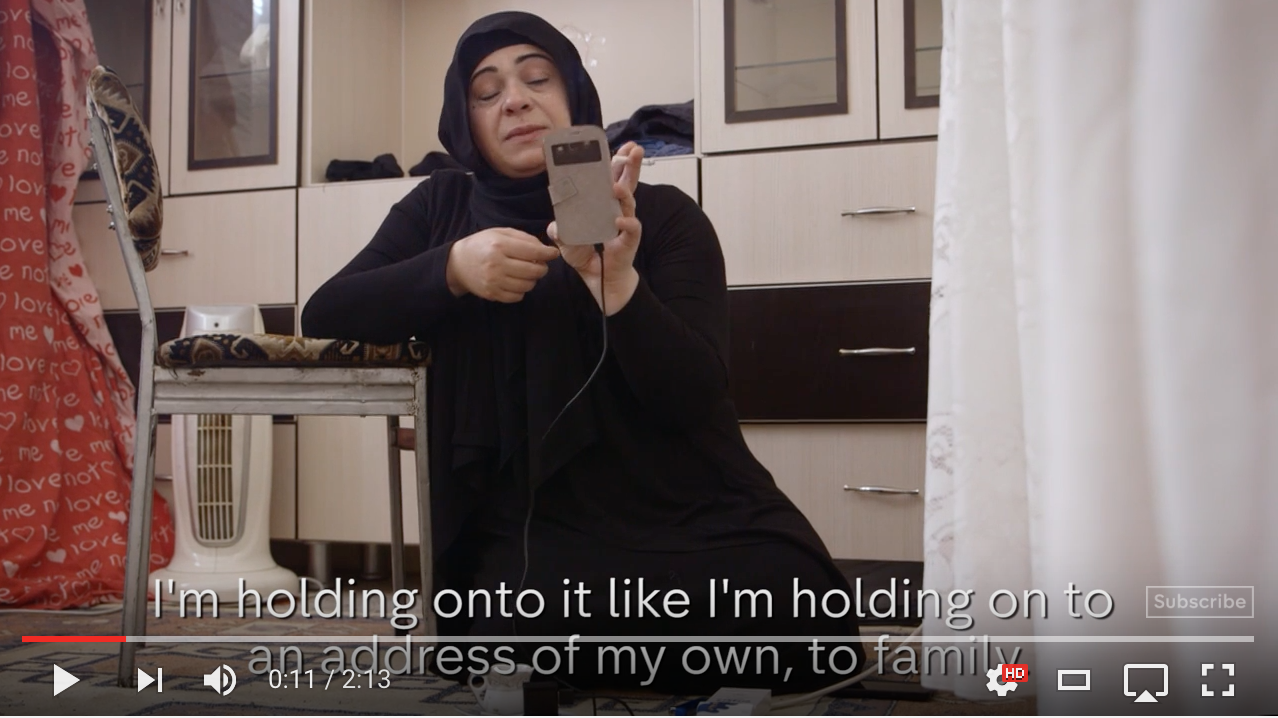 This Is Why Refugees Have Smart Phones

Channel 4 (UK) is airing a documentary entitled Children on the Frontline.

It's a follow up to documentary filmmaker Marcel Mettelsiefen's 2014 film, Children on the Frontline: Syria.

In the first film, Abu Ali, a Syrian Freedom Fighter is captured by ISIS.  His family is left alone.

Two years later, Mettelsiefen rejoins Abu Ali's wife and her four children as they make the painful decision to leave Syrian and head for Europe.

The film follows them on their harrowing voyage (having left Abu Ali's aging mother behind as she is too old to make the trip), across Europe and finally settling in Goslar, Germany.

It is a film well worth watching.

However, I was particularly taken by one segement of the film, an outtake entitled "This Is Why Refugees Have Smartphones".

In this short 1:40, Hala, Abu Ali's wife and the children's mother, explains why she always has her smartphone with her. It contains all her memories.  It is poigniant.

But is also, at least to me, raised a far more interesting idea.

We have all seen endless coverage of the Syrian refugee crisis in Europe.  Nearly 1 millon refugees, many from Syria, but many others from Iraq, Pakistan and more, streaming into Europe, caught at closed borders, risking their lives on small boats to get from Turkey to Greece and so on.

One notes and many have noticed that almost all of these refugees have smartphones with them.  They are almost universal now.

Hala explains why she has a smartphone, and of course, it does carry all the photos of her past.

Those smartphones are not just the repository of photographs and old text messages, they are also, each of them, video production and uplink facilities.

Each of those refugees has a poigniant story to tell.

What she needs is a video camera and a way to share her video with the world.

That she already has.

And what she needs is someone to show her how to use the rather remarkable power that is already in her hands.

That is the part she doesn't know... yet.

Consider this:  There are 1 million refugees who have made the same voyage that Hala has.  They all, more or less, have smartphones that can record video.  I would bet that a good number of them are actually making video of some kind or another.

And this has been going on for a year? More?

that would be millions of videos from the people who are actually expriencing the tragedy, first hand.

Yet in all the countless hours of coverage of this event by The BBC or NBC or CNN, how much of that highly personal, all too real and honest video have those networks ever aired?

Would none be a good esimate?

Because you can't 'trust' what Hala says?

Because you need to send a 'reporter' who doesnt' speak Arabic to 'report' the story?

Hala and her compatriots have enormous power in the palm of their hands.

They need only learn to use it.