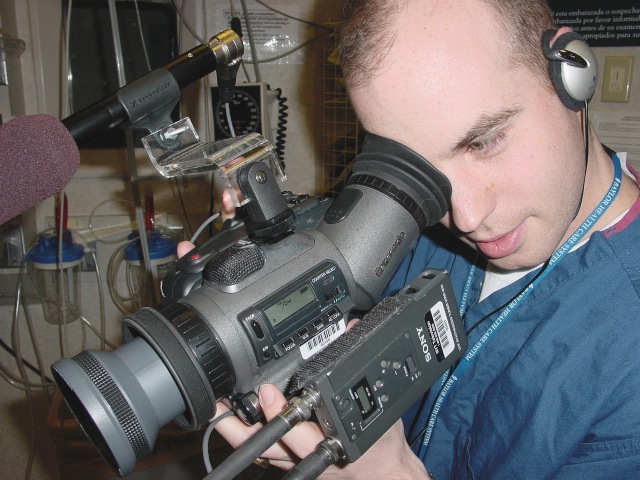 Yesterday, Lisa sent me two old photos that she had found.

In the olden days, you would find these in a box in the attic.  As we have no attic, and no box of old photos, she found these while cleaning out her hard drive.

What you are looking at is the very bleeding edge of cutting edge technology, albeit 1993.

As the Times' Managing Editor, Joe Lelyveld, had forbidden us access to the paper, the reporters or the newsroom, ("I don't even own a TV set," Lelyveld proudly told me on announcing the ban), we had to find something else to shoot.

So we went to some hospital emergency rooms and started shooting Trauma, Life in the ER for TLC. It would become a bit hit for them and it was done with VJs instead of crews.

We had started with Hi-8 video cameras, but Panasonic sent us a prototype of an entirely new kind of video camera and format. It shot on something called MiniDV and the camera looked more like a piece of pipe. Panasonic called them VJ Cams, which I liked a lot.  We had serial numbers 00001 - 00007

Panasonic even had to fly in a bunch of engineers from Japan to set up the world's first MiniDV playback deck.

MiniDV, as it happens, took off.

We had, until recently, a large cabinet filled with MiniDV tapes. We had been saving them for years. What for?  We kept one MiniDV playback deck just in case. Just in case of what, I am not sure.

And so MiniDV joins Hi8, VHS, DVDs, UMatic and a lot of other stuff in the dustbin of history.  Today's cutting edge. Tomorrow's trash.

One thing that never changed, no matter what the hardware, was and is the ability to tell and convey a compelling story.

That is what, in the end, will make or break a project or a career.

And that, fortunately, does not change.

It goes as far back as the pencil, which was only invented in 1564.

But that is a story for another day.