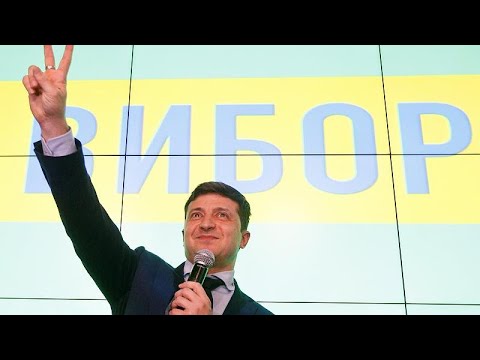 Some fifty years ago, the inhabitants of the planet earth all began to participate in a massive global psych experiment.

What would happen if everyone started watching TV 8 hours a day, every day for their entire lives? What impact would that have on society?

Well, now the results of that experiment are in.

Yesterday, the people of Ukraine, who five years ago rose up against a Russian dominated puppet state, elected a TV personality as their President.

Despite a complete lack of political experience, the 41-year-old comedian and actor Volodymyr Zelenskiy was elected President by an astonishing 72%.

What made this election even more interesting is that Zelenskiy's only prior political experience was (and is) that he plays a school teacher who becomes the President of Ukraine in a popular TV series.  That was all, but it was more than enough.

Zelenskiya now joins the ranks of other TV personalities who have risen to power,  such as Congressman Fred Grandy from The Love Boat, Senator Fred Thompson from Law and Order, Congressman Ben Jones, who of course was Cooter on The Dukes of Hazard, and Donald J. Trump, star of the 10-year hit, The Apprentice.

This should not really surprise us.

We now spend more time watching TV and videos than we do working, eating, reading, exercising and even sleeping.  Watching stuff on screens is now our number one activity, bar none.  We are Olympic class watchers.  We have pretty much-replaced contact with reality with contact with entertainment.

And all that watching has a very deep impact.

It defines who we are, what traits we respect and ultimately for whom we vote.

We are a media first society.

Many people say that JFK was, in fact, the first 'TV President', and there is no question that he looked better on TV than sweaty, swarthy, in-need-of-a-shave Nixon did in 1960. when television was first starting to appear in people's homes.

Kennedy may have been better on TV, but he was still first and foremost a lifelong career politician. He was on TV, as opposed to being of TV. Today's winner in Ukraine had absolutely no prior experience in public service, not even as a dog catcher in Lvov - but, as we say in the media biz... 'he played one on TV'. He was a pure product of the medium, not a politician who looked good on screen.

Maybe today that is enough.

If it is true, that we can no longer differentiate between reality and Reality TV (and that may be the case), then we have achieved what Neil Postman warned us of more than 40 years ago - we are Amusing Ourselves to Death.

And, if this is really the case, and it would seem to be, then it is all the more critical that we all take control of this incredibly powerful medium. The content can no longer be left to the hands of a few media companies only interested in profit. The impact of the medium is far too powerful now.