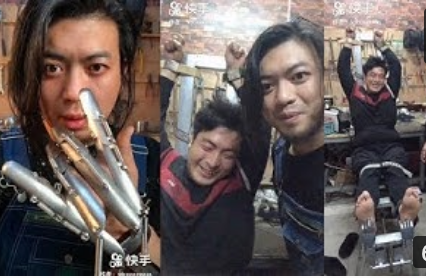 Useless Inventions Are Hot in China

Give a man a fish and he eats for a day.

Teach a man to fish, and he eats for a lifetime.

But build a watermelon slice holder or a machine that keeps hitting you in the head, make a video about it, and in China, you can make millions.

Geng dropped out of school at the age of 12 and went to work for his father in his metal welding shop. He did not have much in the way of prospects for success, but one day he welded a knife to an iPhone case – not exactly a barn burner of an idea, but he did something else – he made a video out of it and put it online.  THAT got views.

He didn’t stop there but proceeded to make an iron comb that was more than 2 feet long; a metal spoon to push food into your mouth when you eat street food, and an alarm that goes off if your fly is open.  He made videos of all of them.

Today, he has more than 2.5 million followers and has made more than $1.7 million from his videos.

He is not alone.  Stupid inventions is a big hit in China.  It is part of a Chinese industry that annually generates more than $4.7 billion in revenues. It is all about average people doing strange things on video.  These are not ‘influencers’ in the Western sense, but rather just regular people making videos of that they do – from karaoke singers to farmers.  There are even videos of people studying.

In a kind of ‘video populism’, the videos seem to have struck a nerve amongst those in China who feel that they are being ‘left behind’ or ignored by the elites.  They can’t really take a political position (as there are no elections and no real free press), so they have found an outlet here.

The other thing that seems to make this work so well is that the viewers of the video, instead of being passive, are active participants with the makers – asking questions, getting answers and offering advice. One recent fan of Geng Shuai asked if he could make a pair of iron pants. He is working on them now.