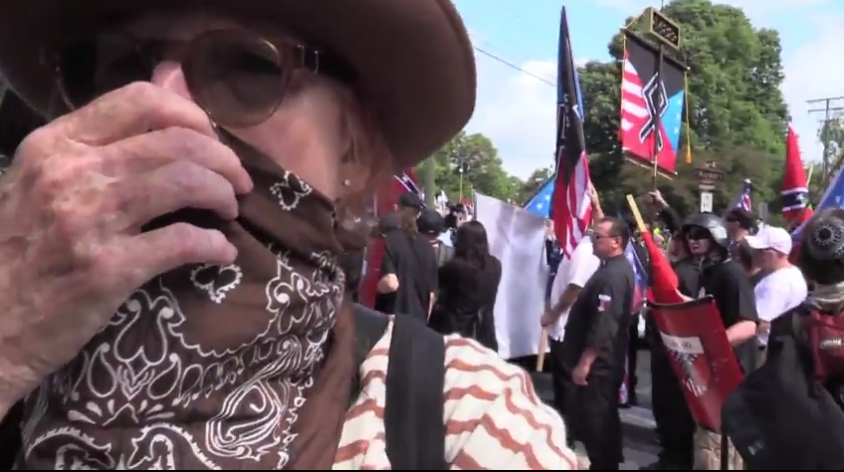 Former student and friend of the site Sandi Bachom has been nominated for the 2017 Ron Kovic Peace Prize for her video work from the Charlottesville Protest earlier this year. The prize is part of the MY HERO Film Festival in Santa Monica, California.

Sandi is an amazing example of what you can do in video. Sandi works for herself and makes a living selling her footage and videos to outlets on TV and the Internet including NBC and NowThis. Chances are you've seen her footage before without even knowing it.

Everyday, Sandi picks up her camera and her gear and goes to find the story. Sandi specializes in political and social movements and she follows the story as it develops. When it was announced that there was going to be a right wing rally in Charlottesville, VA she packed up and went down to the scene before it was a national story; when volunteers from New York were going to Puerto Rico to help with the relief effort, she got on the plane and followed the story. Sandi works just as we taught her. She shoots great sequences, works alone and gets intimate stories that the crews from CNN and Fox couldn't achieve.

Her nomination for this prize is for her work from Charlottesville where she put herself on the front line between the right-wing and left-wing protestors -- even injuring her wrist while on the case. That didn't stop Sandi though. She kept shooting, kept telling the story, and kept at it.

Here's the video that she is nominated for:

Here is the info on the MY HERO Film Festival and the Ron Kovic Peace Price:

Ron Kovic is an accomplished author, painter, and activist who has worked for world peace over the last 40 years. As a former Marine Corps sergeant, he served two tours of duty in the Vietnam War before being wounded in combat and paralyzed from the mid-chest down. He went on to become a prominent spokes-person for the anti-war movement, having since addressed the Democratic National Convention in 1976, President Obama and other dignitaries at the 32nd annual Kennedy Center Honors Ceremony in 2009, and Rome's Mayor Gianni Alemanno and other civic leaders as a member of Council for Dignity, Forgiveness, and Reconciliation in 2010.

The MY HERO Film Festival is honored to annually bestow the Ron Kovic Peace Award to the director of the short film that most effectively addresses the issue of world peace. The accompanying $1000 cash prize supports the critical efforts of artists and peace activists whose work shows the power of non-violent solutions to our world's troubles.

You can check out the My Hero Festival here.