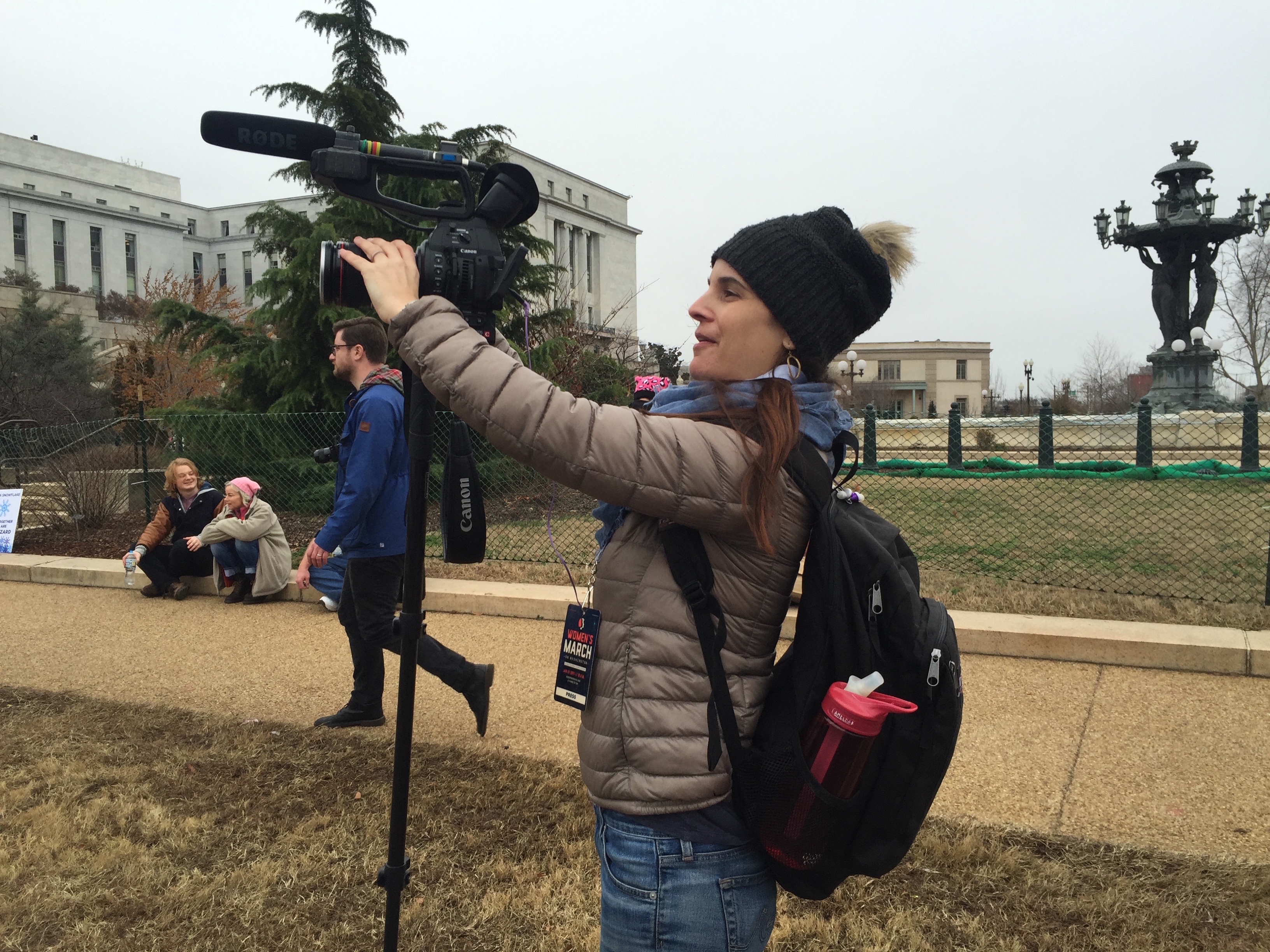 This weekend we went down to DC to check out how the march was being covered by the press.  Remarkably there were a lot of VJs down there, and at marches across the country and world, covering the stories with their cameras, some sound equipment and without a crew. 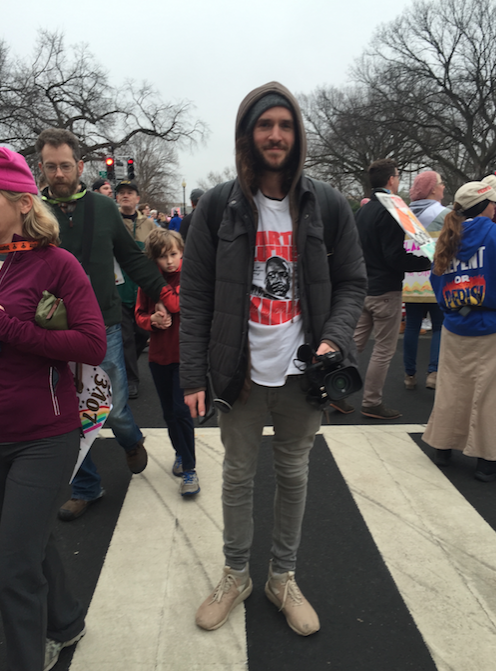 This weekend, millions of people worldwide took part in the Women's March and VJs from around the world came out to cover it.  A march or protest is a difficult story to cover.  There are a lot of people, police, often there are many opinions and goals that are hard to quantify, and anything can change at a moments notice.  With all of these moving pieces, it would be difficult to get the story working as a crew.  If you have a crew you have to maneuver as a team, keep track of all of your equipment and you are instantly recognized as media and may not be able to elicit the same emotions or stories from participants. 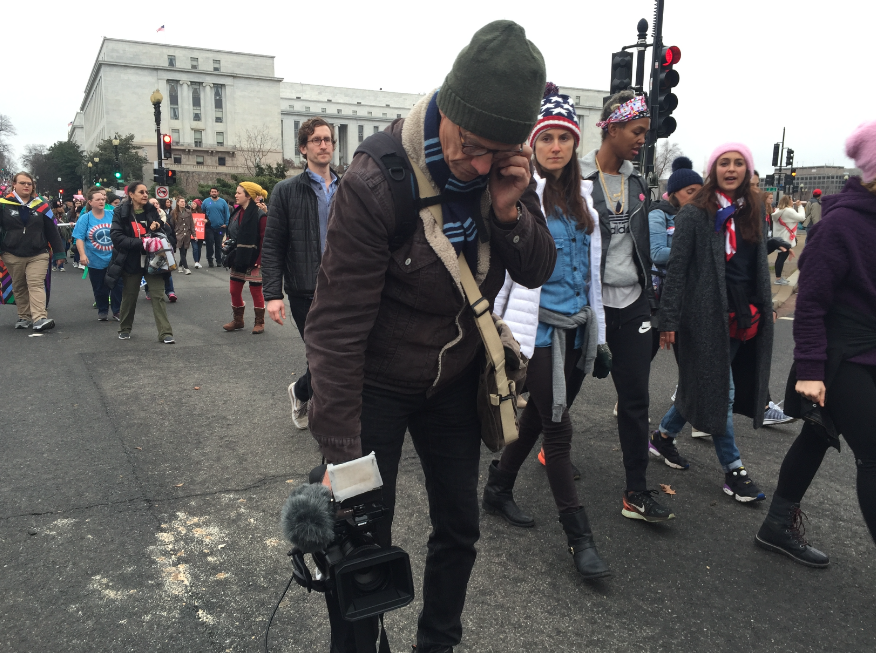 At the march, there were VJs from major news outlets. I ran into VJs from ABC News, The BBC, NPR and The Washington Post respectively. I asked the reporter from ABC News if they had a a crew covering the event as well or just a VJ, to which she told me that there was a crew doing a stand up in front of the capitol, just for live updates, but she was working on the package for the web and nightly news broadcast on the march.  I went to check out the crew set up, in front of the capitol and it was just like the VJ had described.  They were just standing there, waiting for the network to call for them to give the report. But they were on the outside of the march, the VJ was inside talking to people, hearing their stories and getting intimate shots. 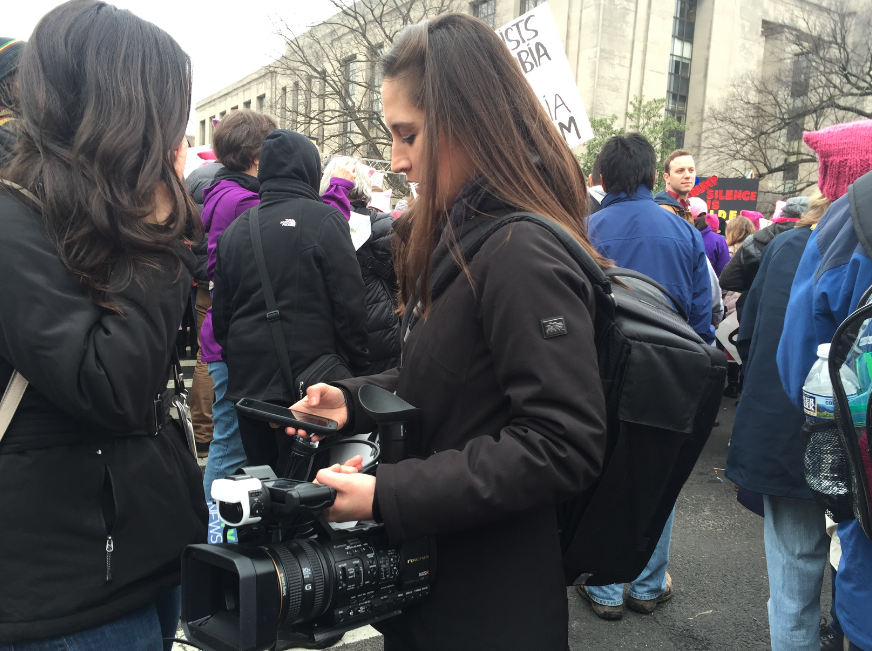 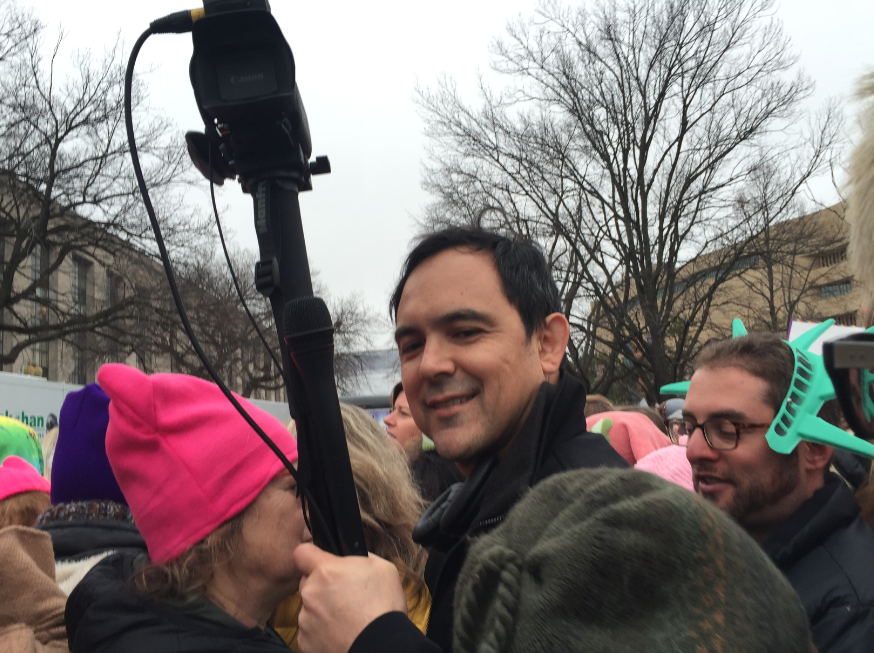 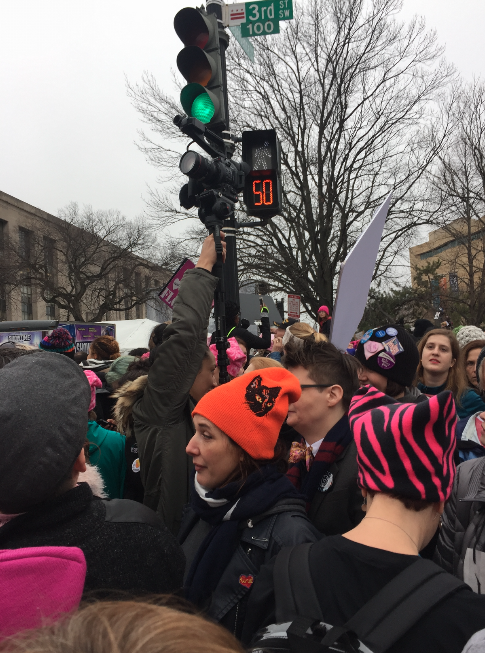 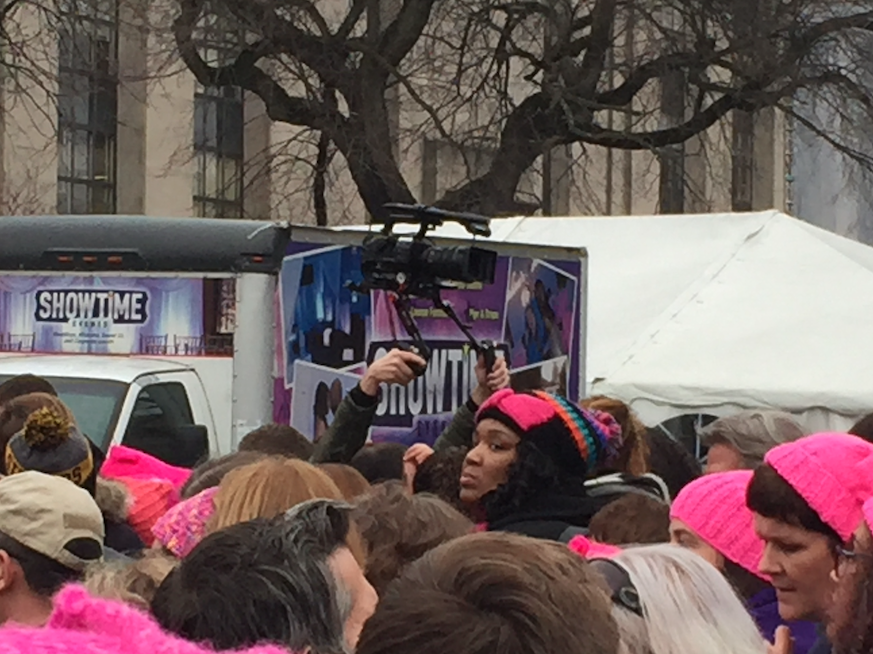 Additionally, VJs from less established outlets were there.  Tiffany Jackson, a VJ from BFFilms was one. She told me that although she is from Brooklyn she came to the march in search of the story, and was looking forward to finding it.  The advantage of working this way is that you are able to make a viewer care on a deeper level about the story than you would with just the stand up from the capitol. If you find a person at the march, decide to follow them the rest of the day and tell their personal story, it is a much deeper lens into it than just some wide shots and voice over about the number of participants and their goals.

There were also many VJs who told me they were there working on a freelance basis. Either they had been contracted already or hoping to sell their work. 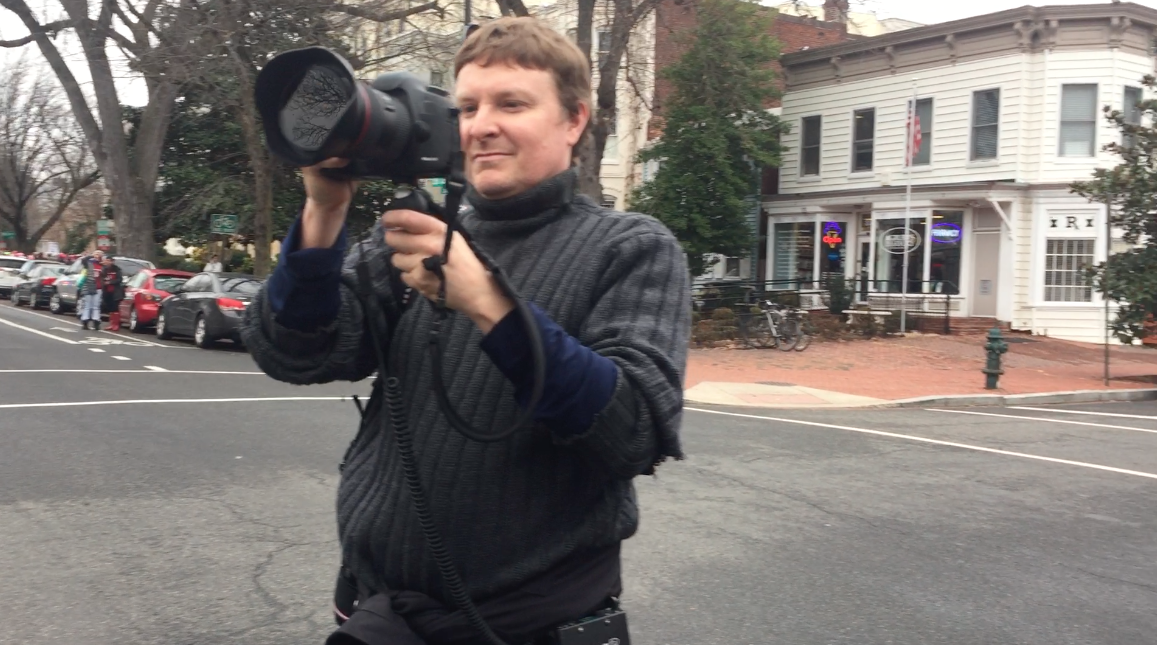 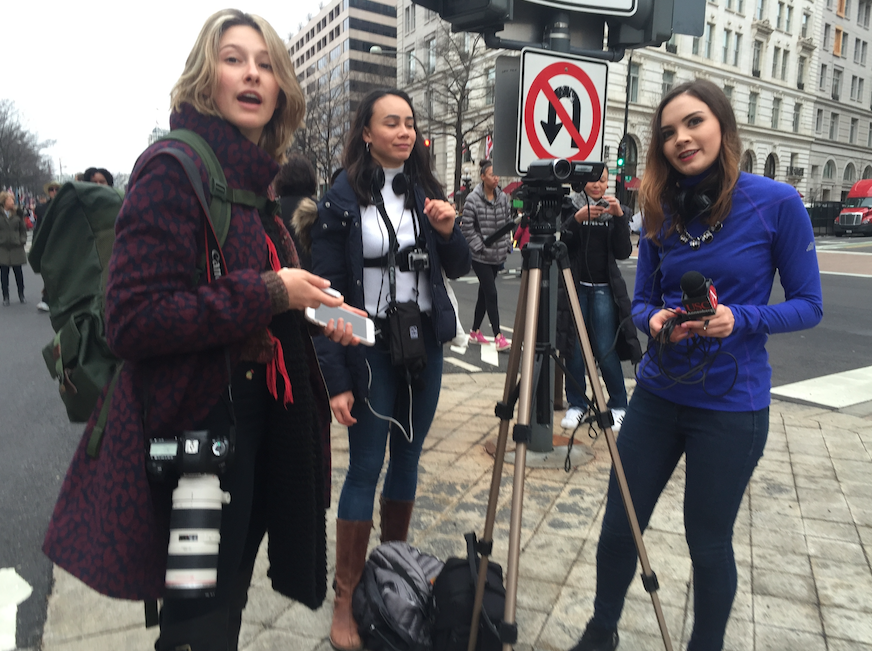 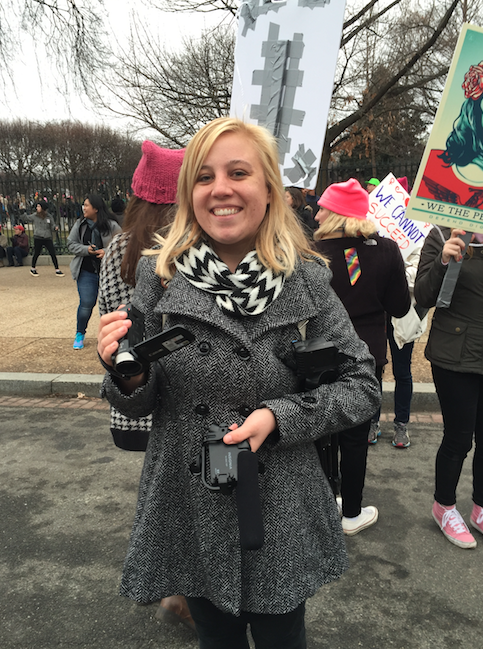 Additionally to credentialed members of the press, the number of cameras (iPhones, Androids, DSLRs and other consumer cameras) in the crowd was staggering. Ranging from people who simply wanted to record the march for themselves or people on their social networks, to student journalists covering the march for their school newspaper.  This highlights the fact that we all have the ability to act as journalists -- particularly at an event like this. When a credential doesn't get you special access and is nothing more than just a tag around your neck, it doesn't matter if you have one or not. At this point, it doesn't matter much if your story is set to air on ABC News or on your Facebook or YouTube page. All that matters is the story you capture. So the next time there is a big event happening in your town or nearby, pick up your camera (or your smartphone) and go out there and find a story. Furthermore, it wasn't just in Washington D.C. either, but VJs covered the march all over the world. One of our own members, Merle Braley, covered the march in Raleigh, North Carolina. 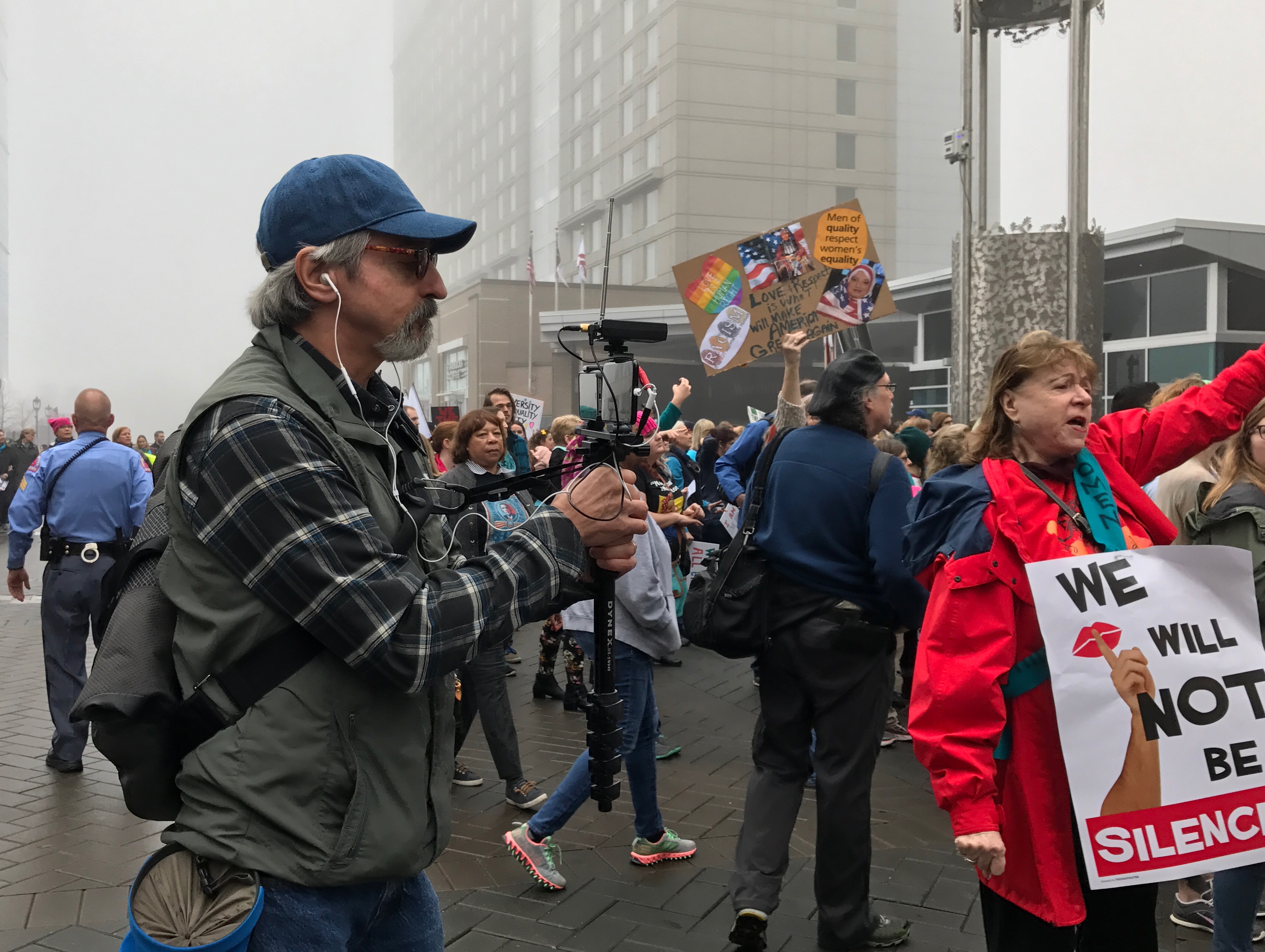