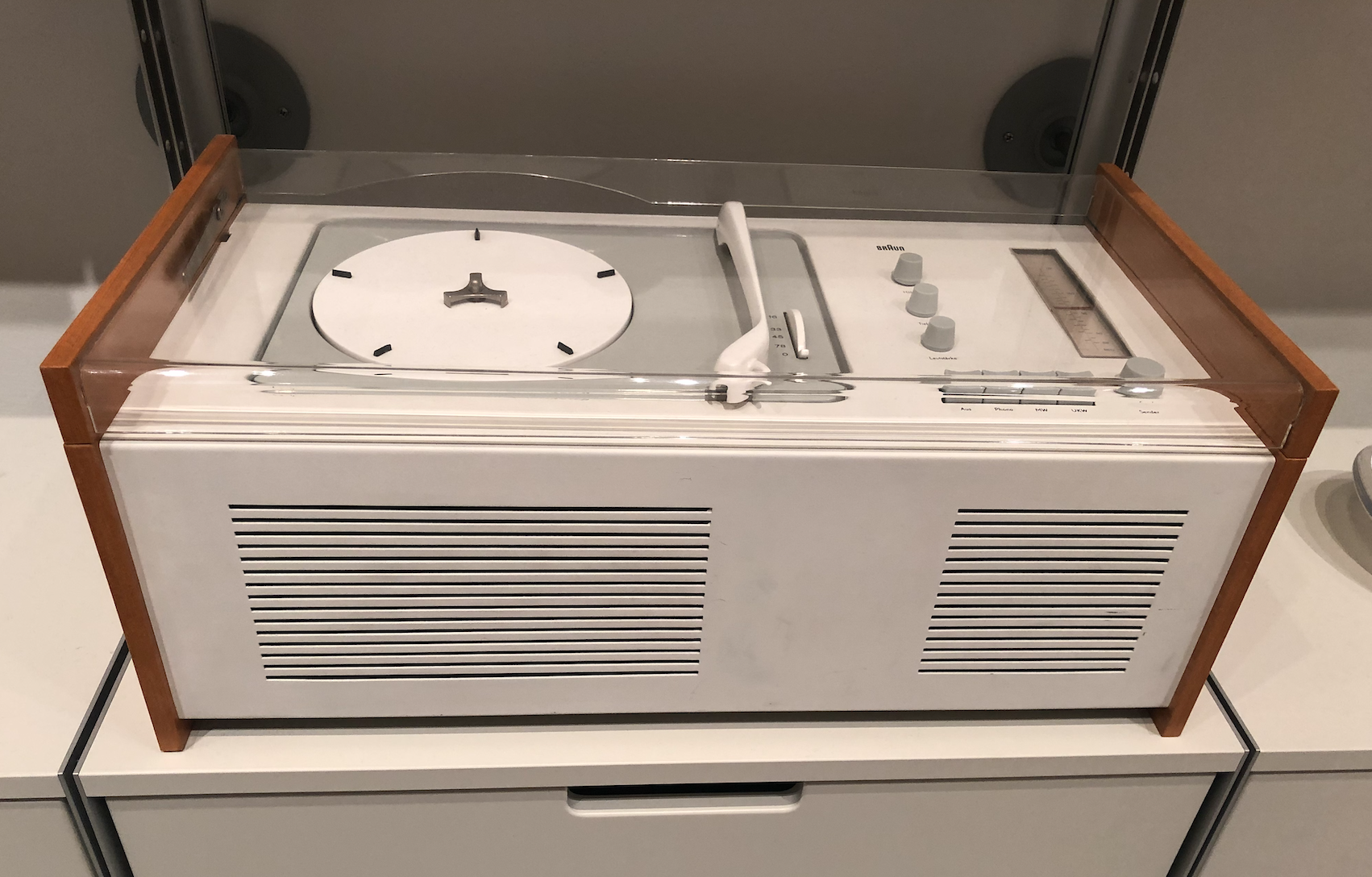 What is that thing?

What Is The Next Piece of Tech To Go?

Last week, Lisa and I went down the MoMA and took in their ever-changing design exhibition.

The current display is: designs from the 1950s, which resonated with me, having been born in the 1950s.

It is sobering to see the things from your childhood now displayed behind glass cases in a museum like so many dinosaurs - which they are.

What was most amazing was how formerly everyday objects have now become artifacts of the past which need an explanation to younger visitors.  (See the phonograph above).

The Austrian-American economics, Joseph Schumpeter coined the phrase 'Creative Destruction' in the 1950s.

It referred to the tendency of new technologies to make old technologies (and the businesses attached to them) redundant. A new piece of tech comes along, like an automobile, and the old piece of tech, like the horse, is driven out of business.

In the 1950s, this was a relatively slow process. As well, even after the arrival of the automobile at the turn of the century (the last one, not this one), there were still horses and people knew what they were.

OK, most people could no longer jump on a horse and ride off like Poldark madly galloping across Cornwall to your next door neighbor's manor house. But people still understood what a horse was and did. The arrival of television in the 1950s did not eviscerate radio, nor did people no longer understand how to turn on a radio.

But... the digital revolution has unleashed a wave of creative destruction the likes of which Schumpeter probably never envisioned. A veritable tsunami of destruction, wiping out everything in its path and leaving no one left standing.

A recent video on YouTube shows 17-year-olds trying to figure out a dial telephone.

And here is one of the kids trying to figure out how a SONY Walkman works. (This is actually part of a series that exposes kids to various bits of gear that they cannot figure out - like typewriters or photographs.  Endless fun)

The die-off rate of technology now is astonishing. As such, I began to wonder what common pieces of tech today are going to be incomprehensible to kids say 20 years from now (or even sooner).

Here are my 3 guesses:

Even if film has gone away, I am willing to bet that traditional still cameras are soon going to go the way of the record player. The idea that you had to carry a separate piece of gear that was not even capable of uploading or sharing an image has to be on the technology death row.  Too bad, as I have a nice collection of them. Calling the Museum of Images soon.

I can still remember saving up for my first set of 'serious' headphones. They were made by Koss and they cost me a fortune. (I was scooping ice cream at Baskin Robbins after school - those suckers represented a lot of Rocky Road. They also had those massive 1" plugs, which I plugged into my stereo (probably also on the dead list). But a generation of earbuds and now BOSE glasses (see the tech section) are making those great but heavy and bulky headphones obsolete. Too bad.

OK. I am going to take a wild shot in the dark here (but who could have predicted the demise of DVDs?). Like everyone else, my house is filled with electric plugs given over to perpetual charging stations, festooned with 'docks' or whatever you call them, and wires with various plugs on the end. I am willing to bet that this whole mess will soon be done away with by some as yet unknown (at least to me) Telsa (Nikola, not the car) over the air electric system.

If you have an idea for a soon to be obsolete technology, let me know.