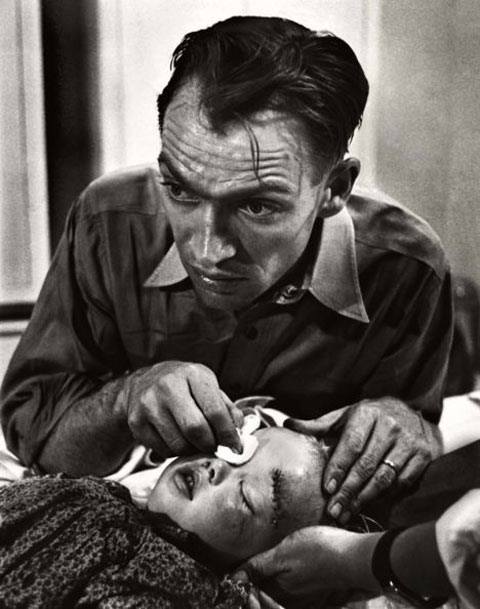 In 1932, the Leica company brought out its Leica 2, the first really useable 35 mm still camera.

The Lecia was the right idea at the right time. That same year, the Agfa company brought out a new kind of film - 35mm, in a roll, that allowed photographers to shoot 36 exposures per roll - as opposed to the one shot that traditional sheet film in traditional view camera had allowed.

It was a technological revolution.

Prior to the Leica, photographers in general, and photojournalists in particular, had been severely limited in what they could shoot.  With big bulky view cameras, most of which had to be mounted on a tripod, photographs were static.  You probably have a photo or two of distant relatives photographed before the 1940's.  They stand stiff and stare into the camera. One shot.  Big gear.

The Leica allowed a new generation of photographers, and more significantly a whole new kind of photo journalism to evolve. Because the cameras were small and hand held, photo journalists could now produce incredibly intimate, powerful and personal work.

Photographers such as Cartier Bresson, Robert Capa, Walker Evans, W Eugene Smith and others created a photogarphy that captured the attention of the world, It told a story in pictures.

This new form of photography was officially recognized in 1961, when the Museum of Modern Art in NY mounted its first exhibition of journalistic photography as Fine Art entitled The Family of Man.

Each visual medium is in the end defined by the technology that creates it.

In the world of television news, we see the arrival of iPhones and Smart Phones that are replacing large bulky TV cameras.

These iPhones are, to my mind, the Leicas of the TV news busines. As Leicas did for photo journalism, so too shall the iPhone do for TV journalism

But, as with all things, it takes courageous traditional practioners, who will embrace the potential of the new technology and take it to new places, as opposed to simply replicating what they have done before, albeit with smaller gear.

Tom Walters, the Senior Photographer for Spectrum News 1 (Upstate NY) is such a person.

Take a look at the story that he did last week during our one-week video bootcamp.

It is searlingly powerful, personal, intimate and deeply moving.

He says, 'this is what an iPhone can deliver'

And this is but the beginning.

Tom Walters is doing with an iPhone what W Eugene Smith and others did with a Leica.

He is taking TV news into the world of Fine Art.

When the Leica was invented, many if not most professional photographers complained.

The negatives were so small.

The cameras were too lightweight.

But at the end of the day, it was the images that mattered most and the stories that those images tell.