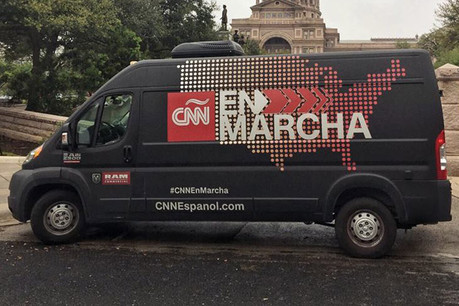 Why Does TV News Still Need a Studio?

When most people think of news they think of well-lit studio, a desk, and two attractive people who know how to read words off a teleprompter. This is strange because almost all of the news comes from outside the walls of the studio. Studios themselves are a relic of an older age of television, and have outlived their need.

In the earlier days of television news, having a studio was indeed a necessity. Stations had to have a central location to transmit their broadcast to the world. They could go collect the news, film and photos from outside the studio, but when it came time to broadcast all that out to the world, it had to be in a central location next to all the wires or the satellite later on. The studio was a solution to a technical and engineering problem, not an inherent aspect of television. The studio was a place where pieces could be edited, broadcast shot, and everything transmitted.

Now, this not true anymore. A station no longer requires everything to run though the studio. All they need is basically the transmission satellite, but that doesn't require a full studio to do just that. Pieces can be shot and edited in the field, notes and changes can be made on the Internet, and everything can be delivered on the Internet as well. The newsroom no longer serves any purpose -- if anything it keeps journalists away from the news.  Everything for the evening broadcast can be done outside of a studio, and additionally there really isn't a point to two people behind a desk transitioning from story to story. Particularly now, with many people getting news on social media platforms, the news operation now has many ways of reaching an audience, and none of it requires a studio.

Over the past year, CNN has experimented with this model as they launched two mobile "studios" to travel the country and report news where it is: out in the world. The project, called CNN en Marcha, has utlized social media, as well as VJ techniques to storytelling to prove that working without a studio is possible and works.

The two vans units were made up of a small team consisting of a producer, driver and reporter -- just three people to report on the news. The project is for CNN en Espanol and produced amazing results and engaging content.

While CNN, one of those traditional operations that still uses a huge studio for its main broadcasts, was able to throw a lot of money and resources at the project, but the same results can be done on a shoestring budget. Instead of a branded van, just use whatever wheels you can get your hands on, instead of big cameras, use anything that can shoot in HD (even your phone), and instead of an expensive edit suite in the truck, you can use Final Cut or Premiere Pro.  At the end of the day, you have pretty much the same distrubition tools that they have -- social media paltforms -- all you need to do is make great content and do the work to get eyes on your videos.

"It's a 24/7 operation," Muñoz told Journalism.co.uk. "Part of the idea of en Marcha is that the whole trip is a story in itself, the audience are following us and we have to be ready to engage with any moment that is newsworthy – it has been a really interesting time."

When they started out last year, Muñoz and his team thought it would all go smoothly, he said, but just like any initiative, the project has evolved over time, and the team have learned best practices for covering stories on the road.

"One of the things we have discovered is that the truck is just like having another journalist with you – it is part of your team and has needs," he added, explaining that aspects such as vehicle maintenance played a big part in their plans.

They that found factors like traffic, last minute interviewee cancellations and the weather all need to be considered well in advance in order to make things go as smoothly as possible.

"It's easy to assume you'll have a perfect trip, but you learn very quickly that you have to change plans all the time, and you have to be comfortable with that.

"We have learned it is vital to plan, plan, plan, and factor in everything that might occur – you might be driving to do an interview, and then see something happening on the street, and have to stop, capture the story and re-arrange your interview. It's about being flexible and as prepared as possible."

The team also have an organisational structure laid out in advance, not just for the stories they are going to cover, but also for the parking permits they will need and the filming restrictions in each location, for example.

"We do a lot of research before we report on any main event, and spend a lot of time finding accommodation, securing interviews and making sure we know what is going to happen in the event we are covering – logistics are hard to nail down and technology can fail in the field, so planning is key."

Before they arrive at a destination, the production team aim to tell their audience where they are going to be, checking in online when they get there.