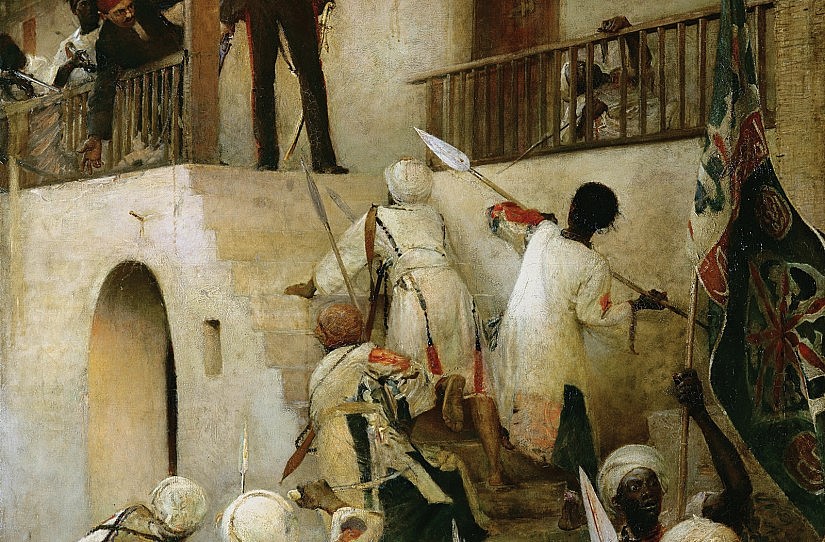 In 1883, another crisis of 'Islamic Fundamentalism' captured the attention of the world.

The Mahdi, the Osama bin Laden of his day, and his followers the al-Ansar (think of them as ISIS) began a take over of Sudan.  Sudan, in those days was ruled by the British Empire (which in those days, ruled most of the world).  There were about 2500 British nationals in Khartoum, the capital of Sudan and they were in danger, so the government of Queen Victoria (just like in the TV series now on PBS), sent General 'Chinese' Gordon to Khartoum to get them out.

That he did, and it would have been better off if he had left well enough alone, but he didn't.  Gordon, (like many men in the Victorian era) had something of a Christ complex and saw it as his mission to spread Christianity and liberate heathan lands, so he stayed.

It wasn't long before the Mahdi and the al-Ansar were upon Khartoum and also upon Gordon, who met them with his walking stick (not much good there) and was soon killed and beheaded. (Like I said, ISIS).

Britain was so incensed that they sent 8,200 British troops, led by Gen. Sir Herbert Kitchener to teach the Mahdi and al-Ansar a lesson, which they did at the Battle of Khartoum in 1889.  (Travel was not so fast in those days).

Viewed objectively, you might have thought that Kitchener and the Brits were in trouble.  The forces of the Mahdi had 60,000 troops and they held the city (and the country).  But Kitchener had something the Mahdi didn't have - the Maxim Gun.

The Maxim Gun was the first machine gun. It could fire 600 rounds a minute.  The Mahdi had rifles which could fire about 1 round a minute, if you were fast.

The forces of the Mahdi never stood a chance.

That's technology for you.

Now, the weird thing is that you might think that the British (and the Germans, who sent observers to the Battle of Omdurman) might have learnt something about the power of machine guns. They didn't.

Do you know what happens when you walk into machine gun fire? Battle of the Somme - courtesy Wikicommons

The reason the casualties were so very high was that the British and French and German commanders kept marching their soldiers dead smack into the machine gun fire - over and over and over, largely because they couldn't think of anything else to do.

That's what happens when technologies outpace creativity - which happens all the time.

Like the machine gun, the iPhone is a real game-changer in the TV business.

Sitting in the palm of your hands (or your pocket), it costs a few hundred dollars, it shoots broadcast video, it edits, it adds graphics, music, effects, etc.. and then, it allows you to share (or go live) worldwide - for free, and time you want.

And... there are about 3 billion of them (smart phones) in circulation in the world today.

That's firepower - when it comes to journalism and video or TV.

The executives who run the TV networks and the news channels cannot break with their long -estabilished method of covering and reporting th news - a crew with a reporter with a big bunch of expensive gear taking forever and costing a fortune - and severaly limiting the number of journalists and the number of stories and the depth of reporting and pretty much everything else - because they can't think of any other way of doing this.

That's why they are like the WW1 commanders who basically killed off the flower of Europe and an entire generation for nothing.

Not that they are killing people - they are only killing their industry - and denying the rest of us what should be a far better product.

Because a world of 3 billion journalists reporting from all over the world all the time is going to make a richer product than sending out one guy with a 'crew' to a country where he doesn't speak the language, doesn't know the story and doesn't live it - just 'reports'.

The technology is here, now, to make an entirely different kind of video journalism.

It just requires a little bit of courage and imagination.